Paris, Romantic Paris. I forgot the count of visits I have made here. But believe me, every visit I made has its own memories to cherish for my whole life. 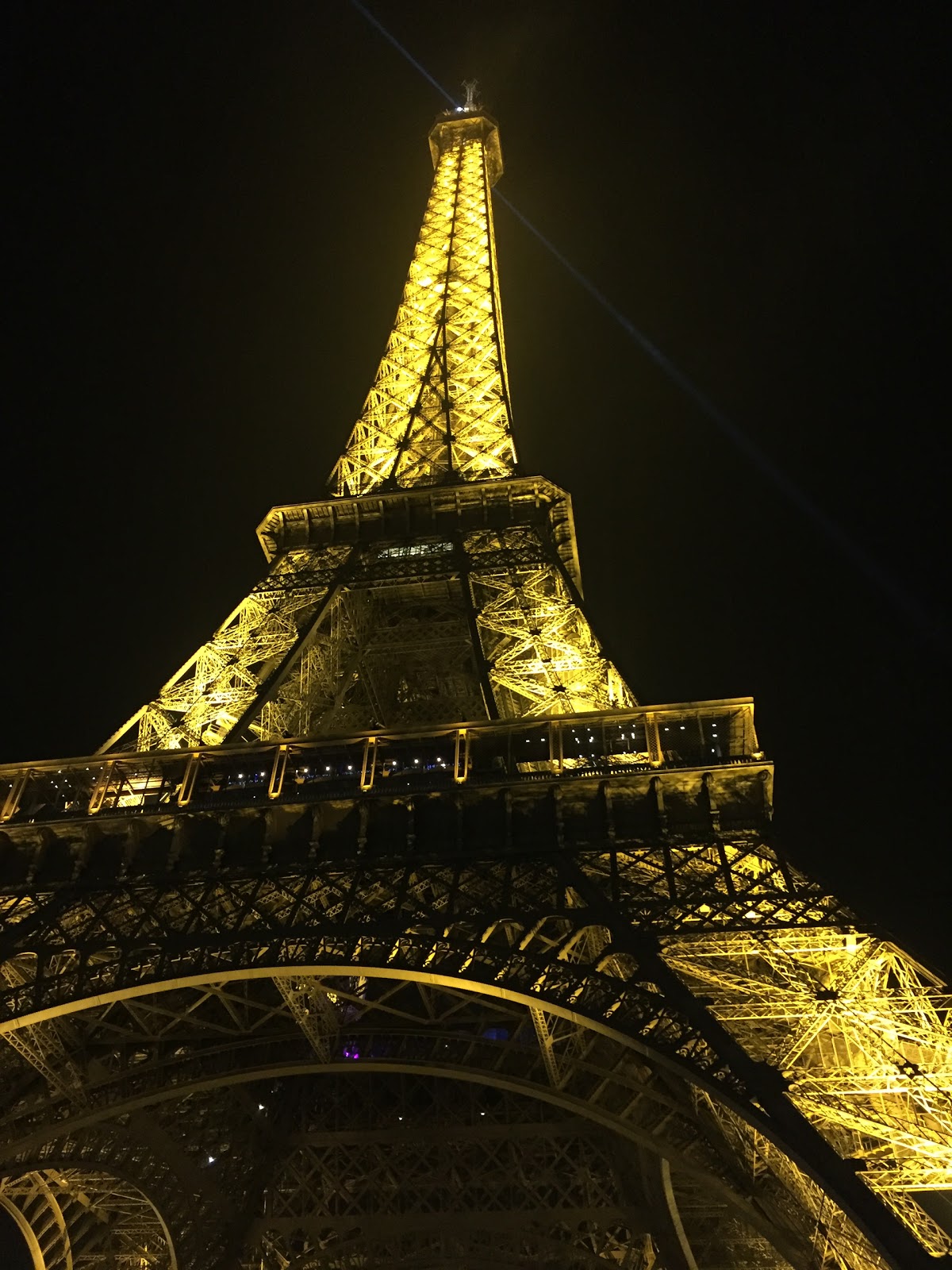 Paris is one place, where you can find the city with people from all classes – from wearing the Louis Vitton, roaming around in Bentley to homeless taking shelter in the Metros and subways. I am sure, you can live a life of your style and money in hand. You can spend the time with your love in the Le Meurice, or Rex, or take a romantic walk in the garden of the Eiffel.

And the city has everything a traveler is looking for.

If you and your Love, are fond of arts & paintings, then you have the Louvre Museum. Not to mention Da Vinci’s famous art placed there in the name of Mona Lisa. For those couples interested in history, you too have a slot in the same museum. You can visualize the life and culture of the past 2000+ years there. Those past lives are neatly mummified for us to see in this century. Be it Roman, Egypt, Greek or any history – this is the right place.

Oh, do you complain that you are with your naughty kids?

No worries, in case you are looking for a day out for your prince & princess, head straight to the Disney land to keep them busy so as to get some time for yourself!

You name it, you can make it in Paris.

And what’s more exotic than wandering in the streets of Paris at the beginning of a New Year! Add to that, you wander with your best buddies… No words for the excitement.

As our famous Don Vito Corleone says it was “An offer you cannot resist” – and the irresistible offer came from our friends in Paris. Without a second thought, we just got the tickets done and boarded the flight – no plans no goals. 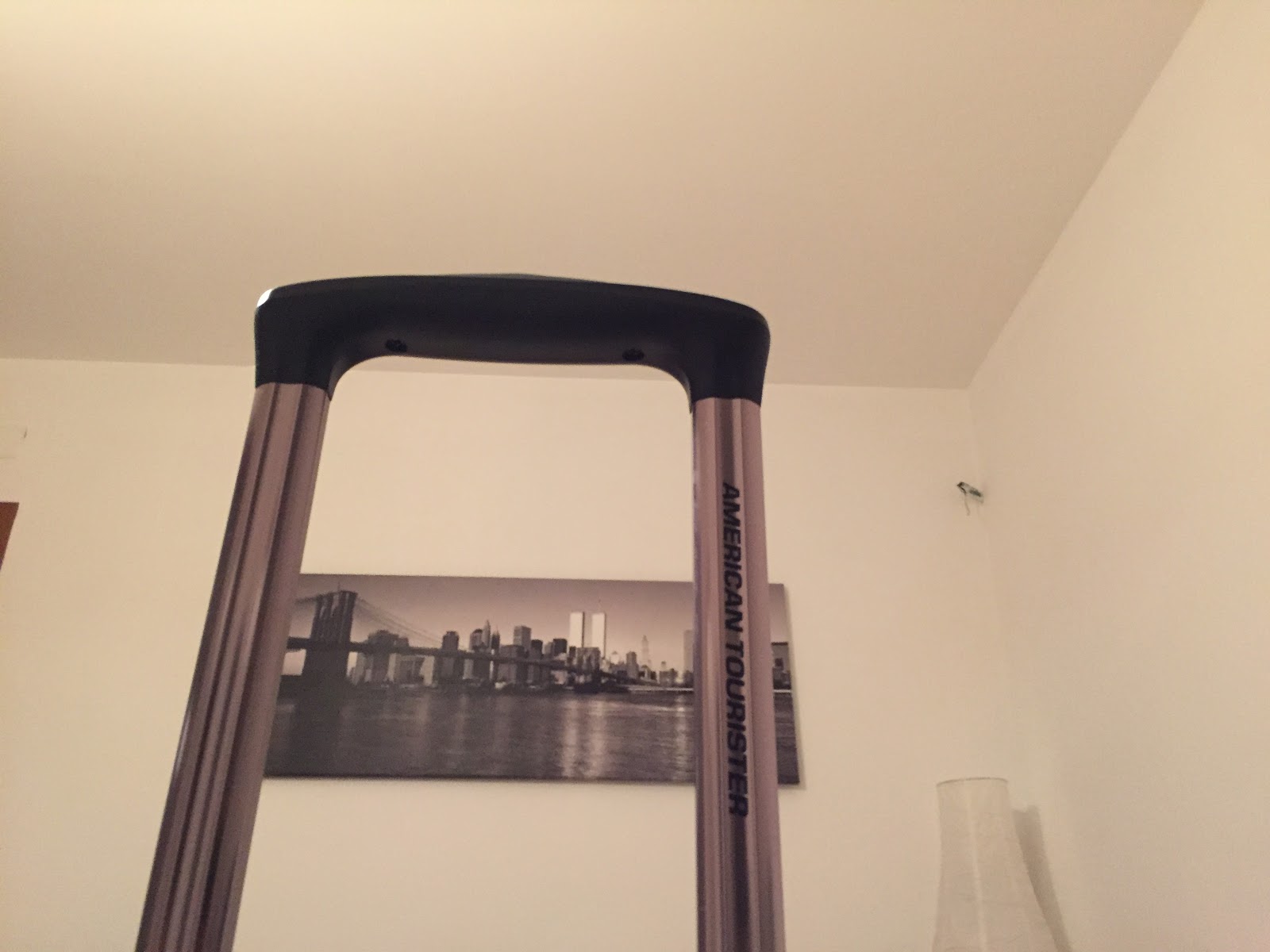 Landing in Paris at night had its own advantage. We had a nice view of the Eiffel Tower with full lighting straight from the flight.

Did you succeed in spotting the Majestic metal Tower in this picture? 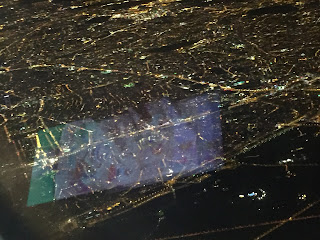 Took an airport taxi to my friend’s place and we called it a day. Airport Taxis here are much cheaper than the one in Milan. They charge a flat 50 or 55 Euro depending on which side of the Seine river is your destination. Remember this river cuts through Paris and has like 30+ impressive bridges.

Keep following this river in the north and you will end up in the English Channel!

Now, do not get ready with those locks for showing your love. Leave the bridge alone, Please.

The first day went in nothing but walking. Yes, my Fitbit smiled with its face showing almost 18K steps in roughly half a day.

On the way, we decided to visit the La Catacombes. But after looking at the crowds and queues in there, we decided to give it a go. The walk finally ended in the Luxembourg garden. Few captures during the walk. 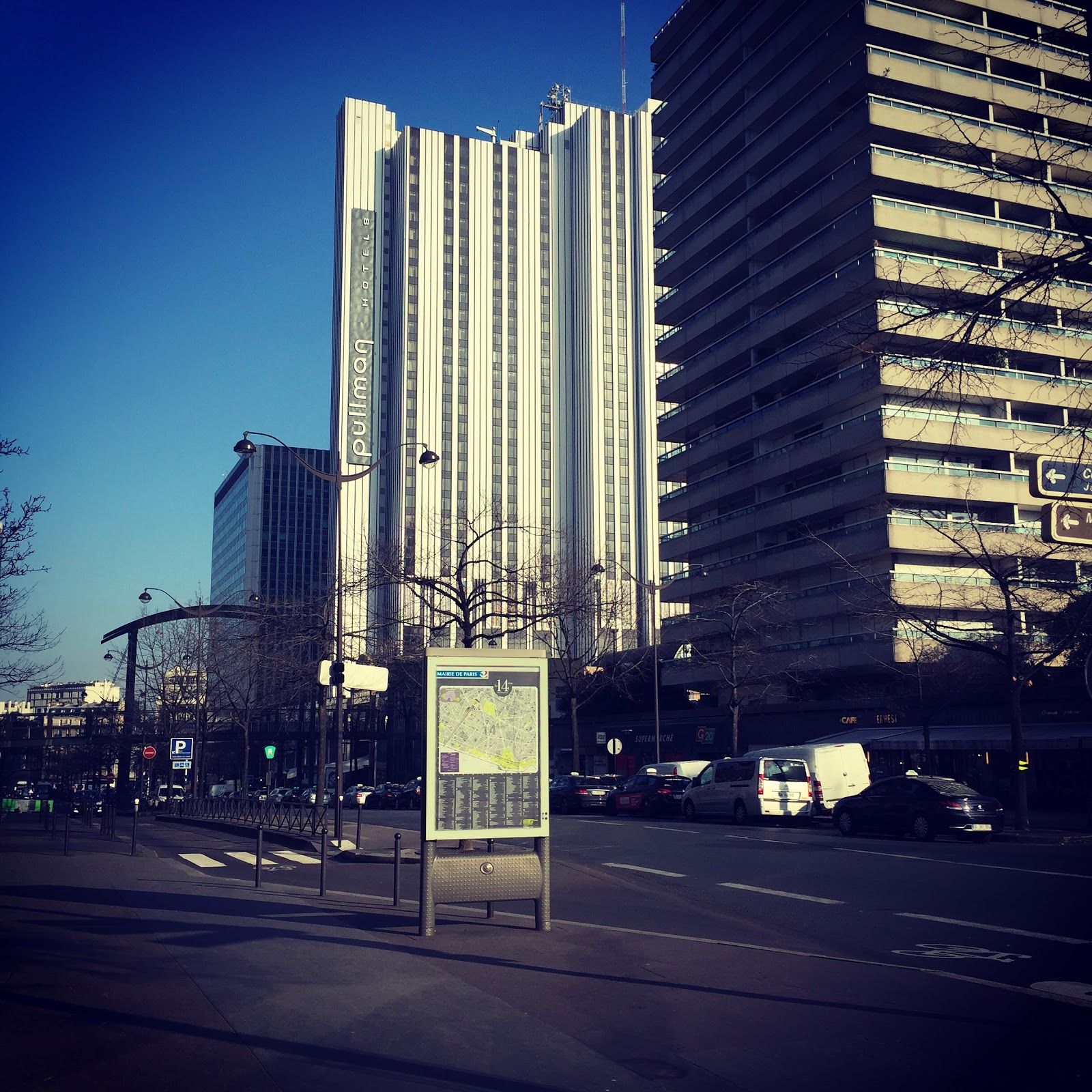 His Majesty, The Lion King 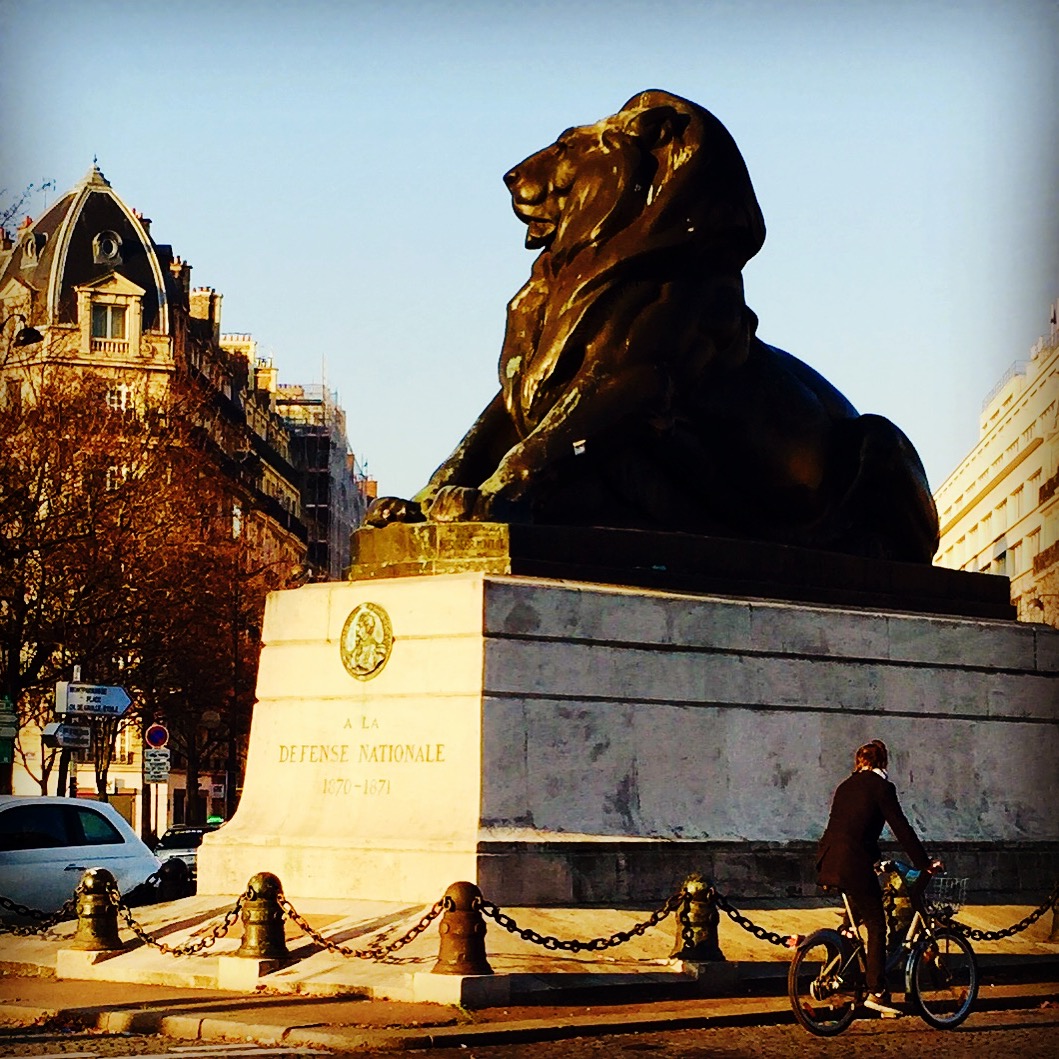 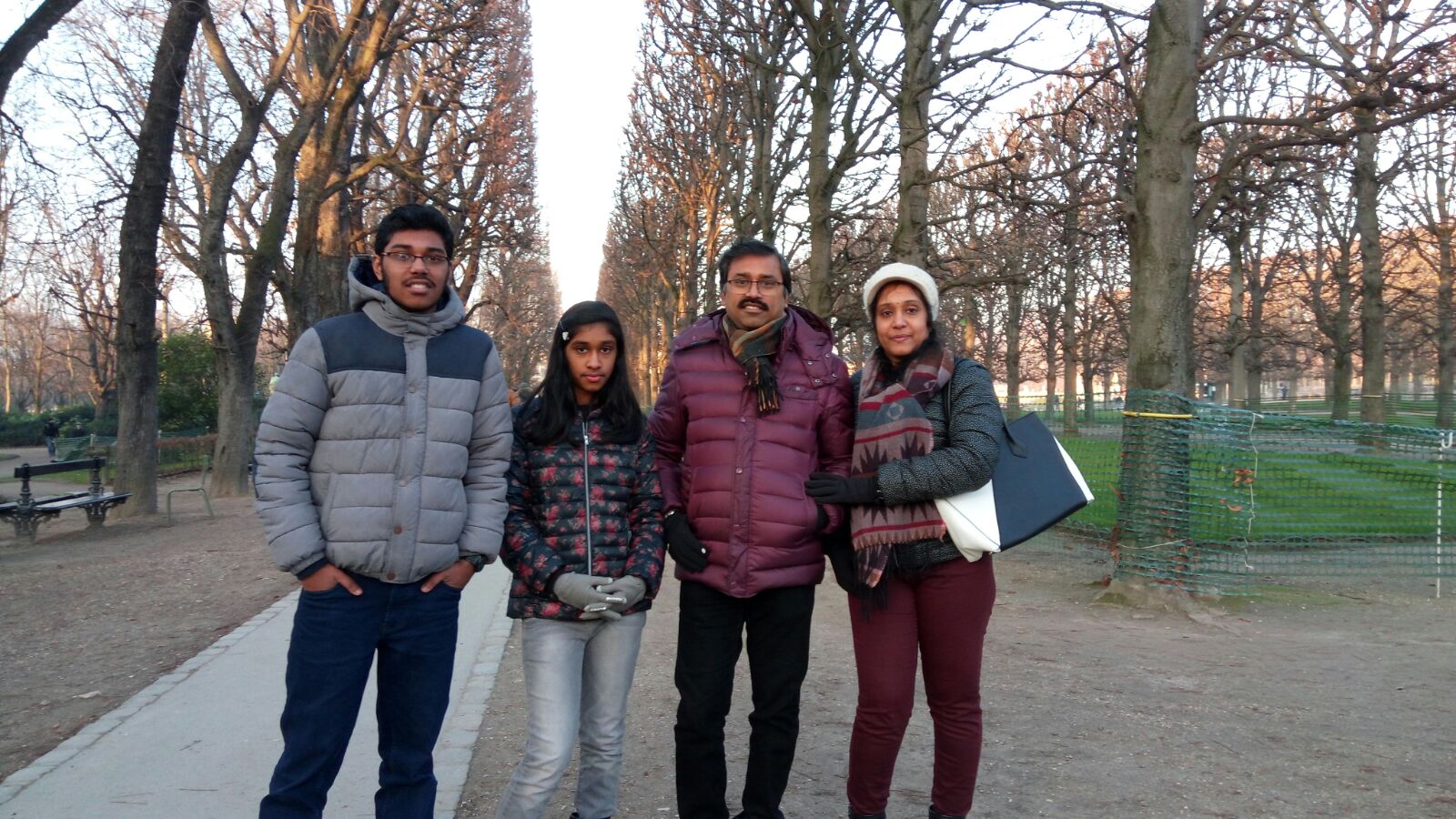 Our little princes in the Royal Palace garden 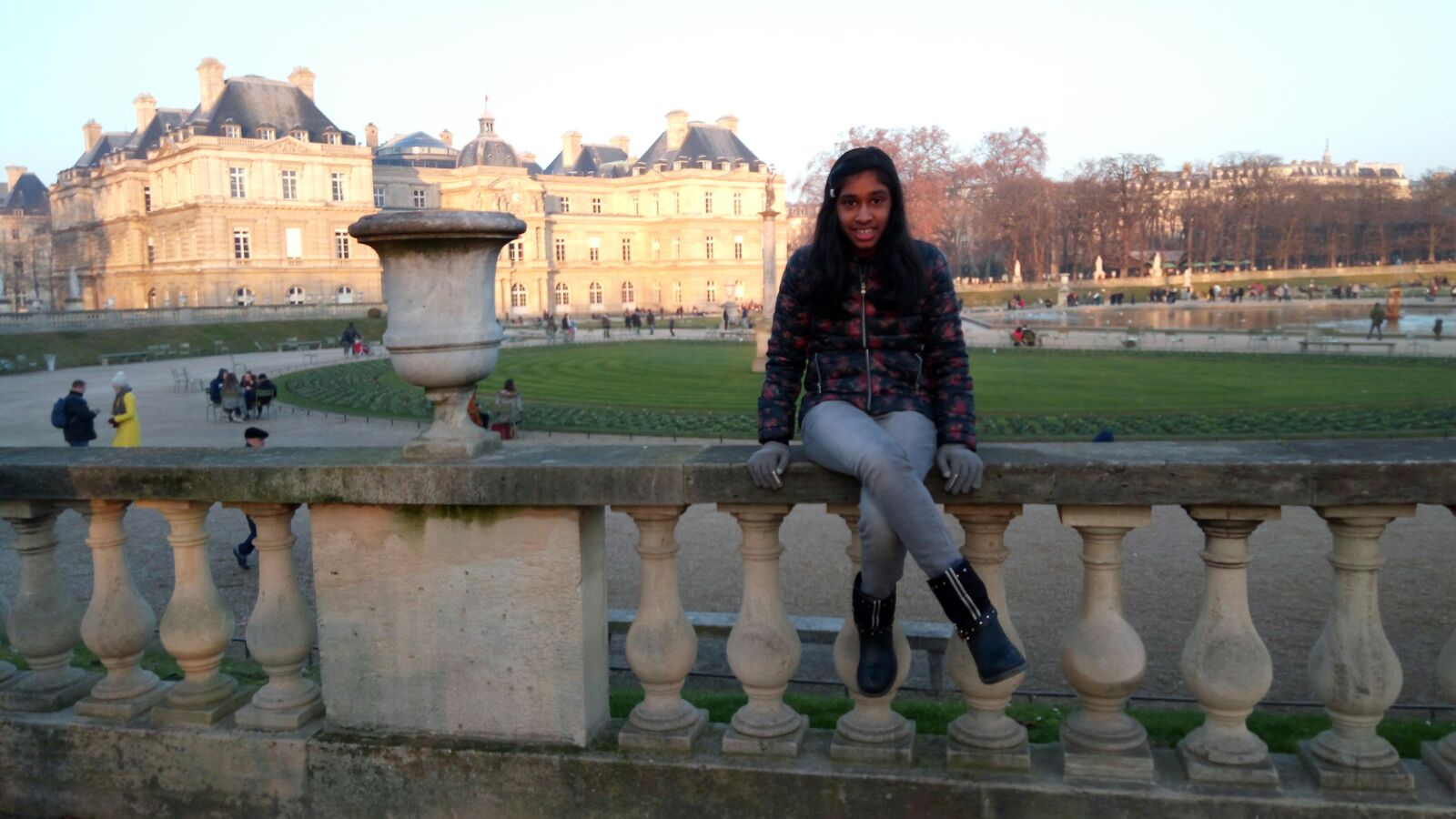 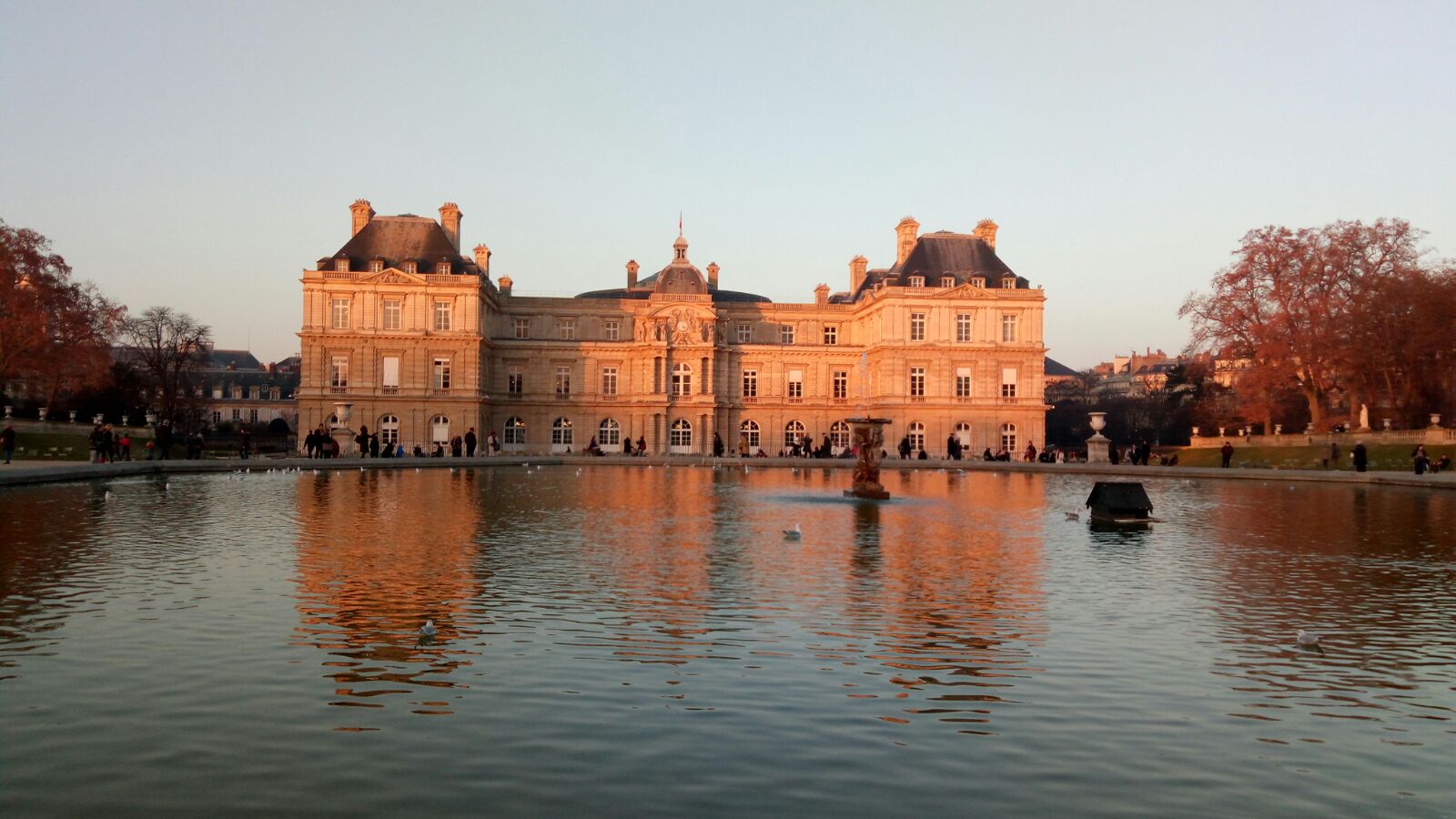 In the evening, we decided to go and visit the Majestic steel lit up. Never, I repeat, Never Ever I get bored looking up to this majestic tower. It was almost after 2 years I was here with my love, strolling around the tower staring at it at every angle. If I ask myself where I spend more time – looking at my Love or this tower – I am inviting trouble. So, lesser said is good. 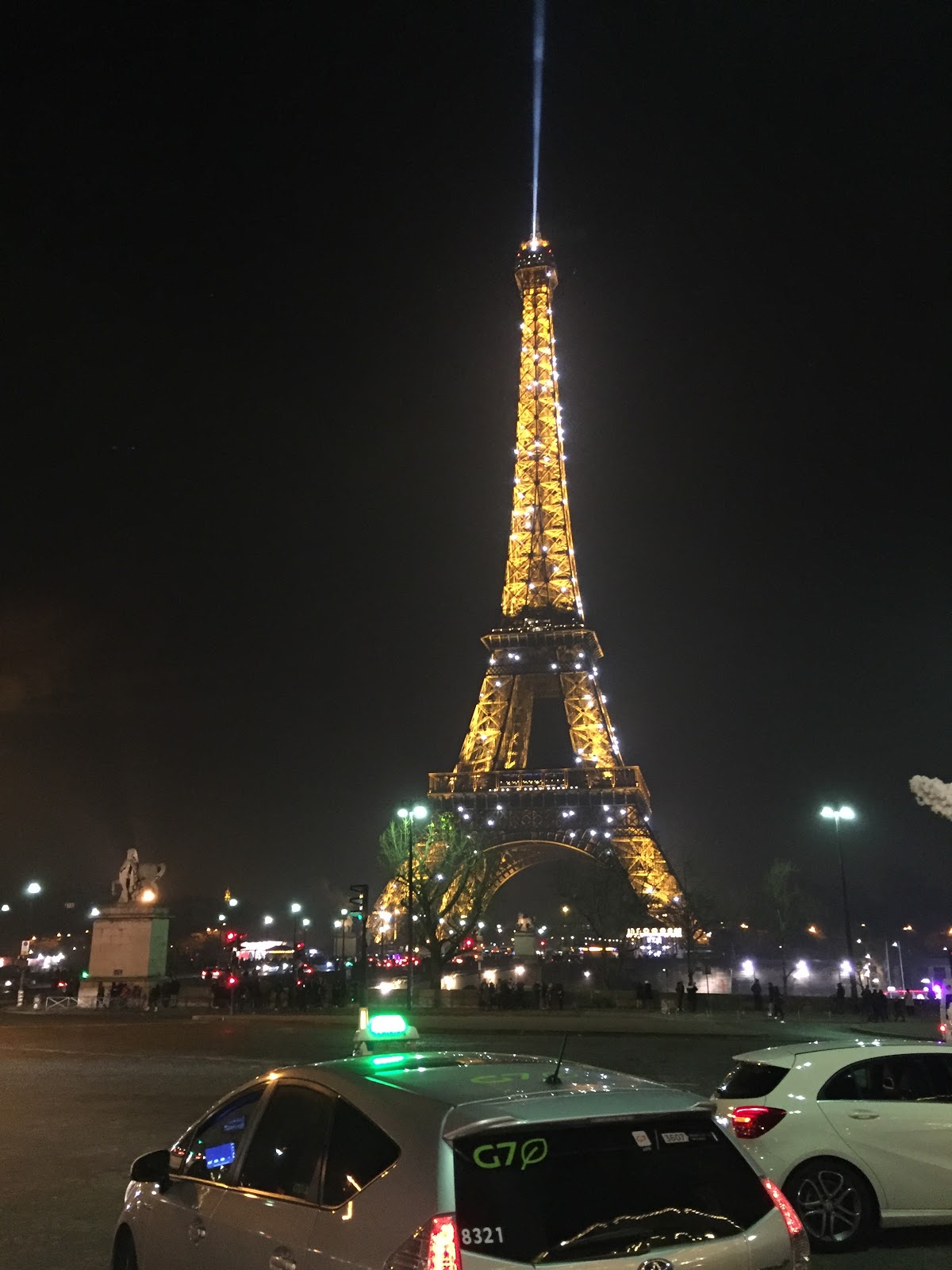 This majestic tower looks so inviting irrespective of which direction you are approaching it. I still remember my first visit here with my humble Yashica – with the Flim rolls. And always had the fear of exhausting my rolls every time I admire this beauty. 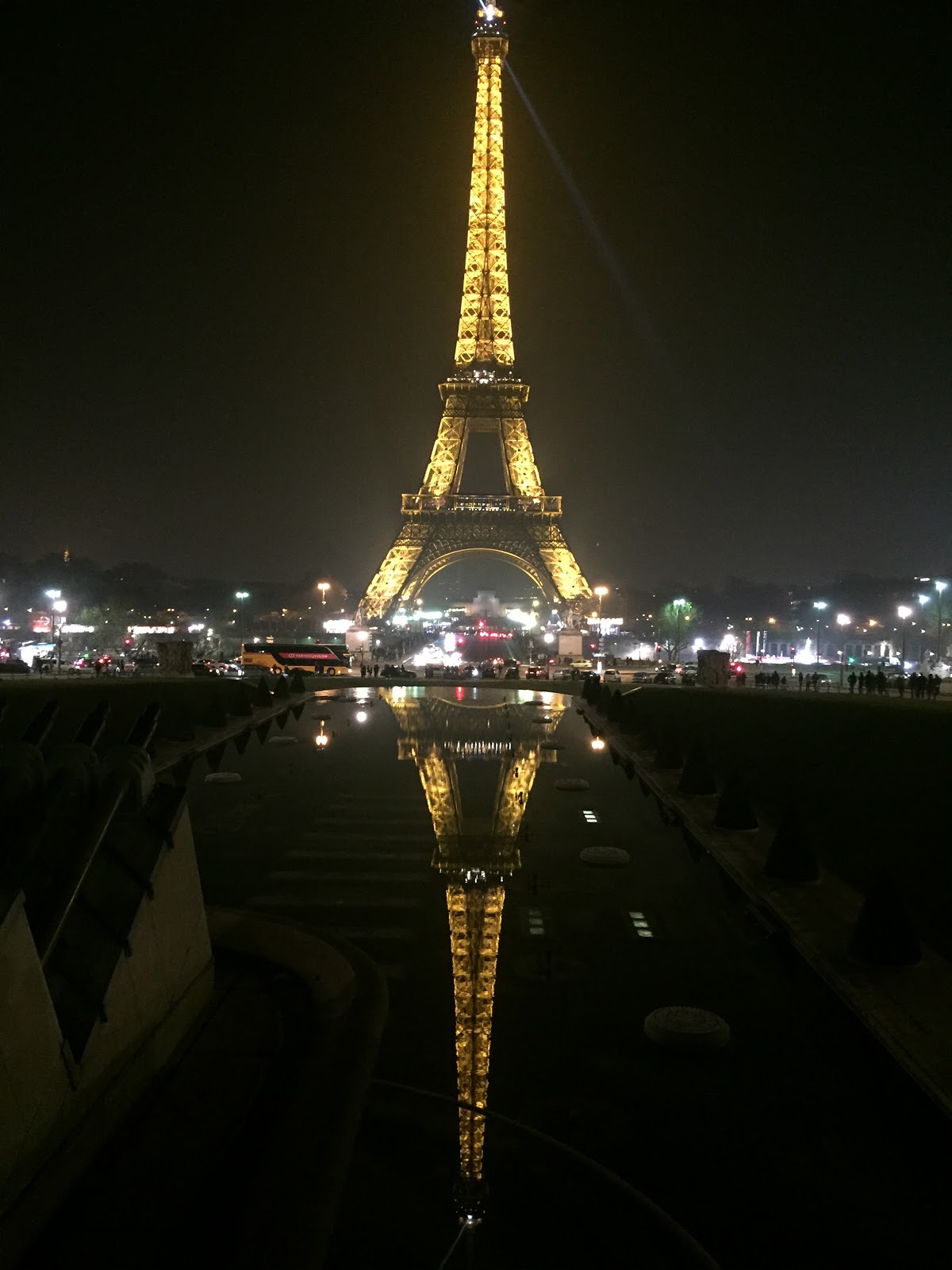 Wow, that pretty, right? Yes, I did mean the Tower. 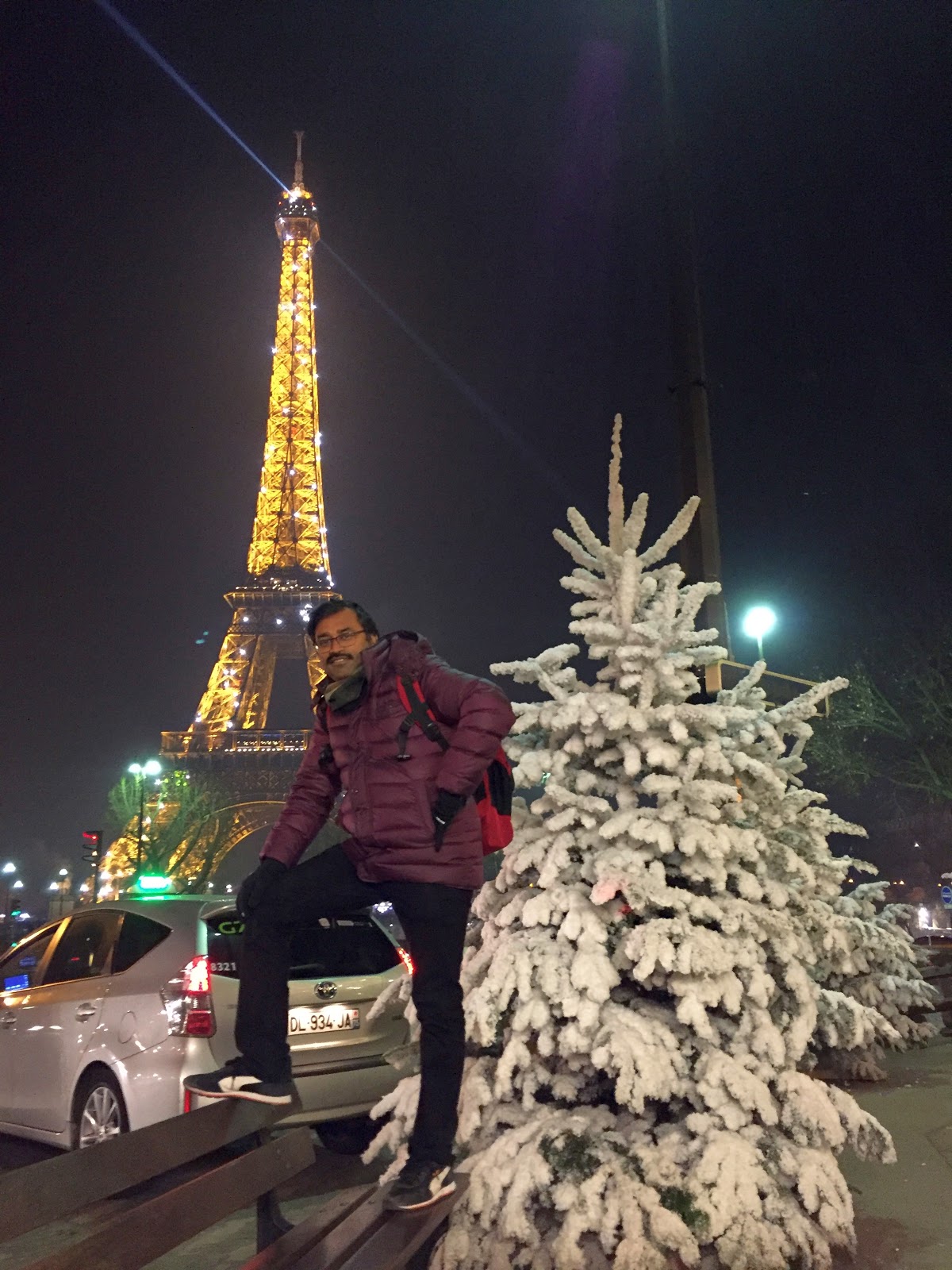 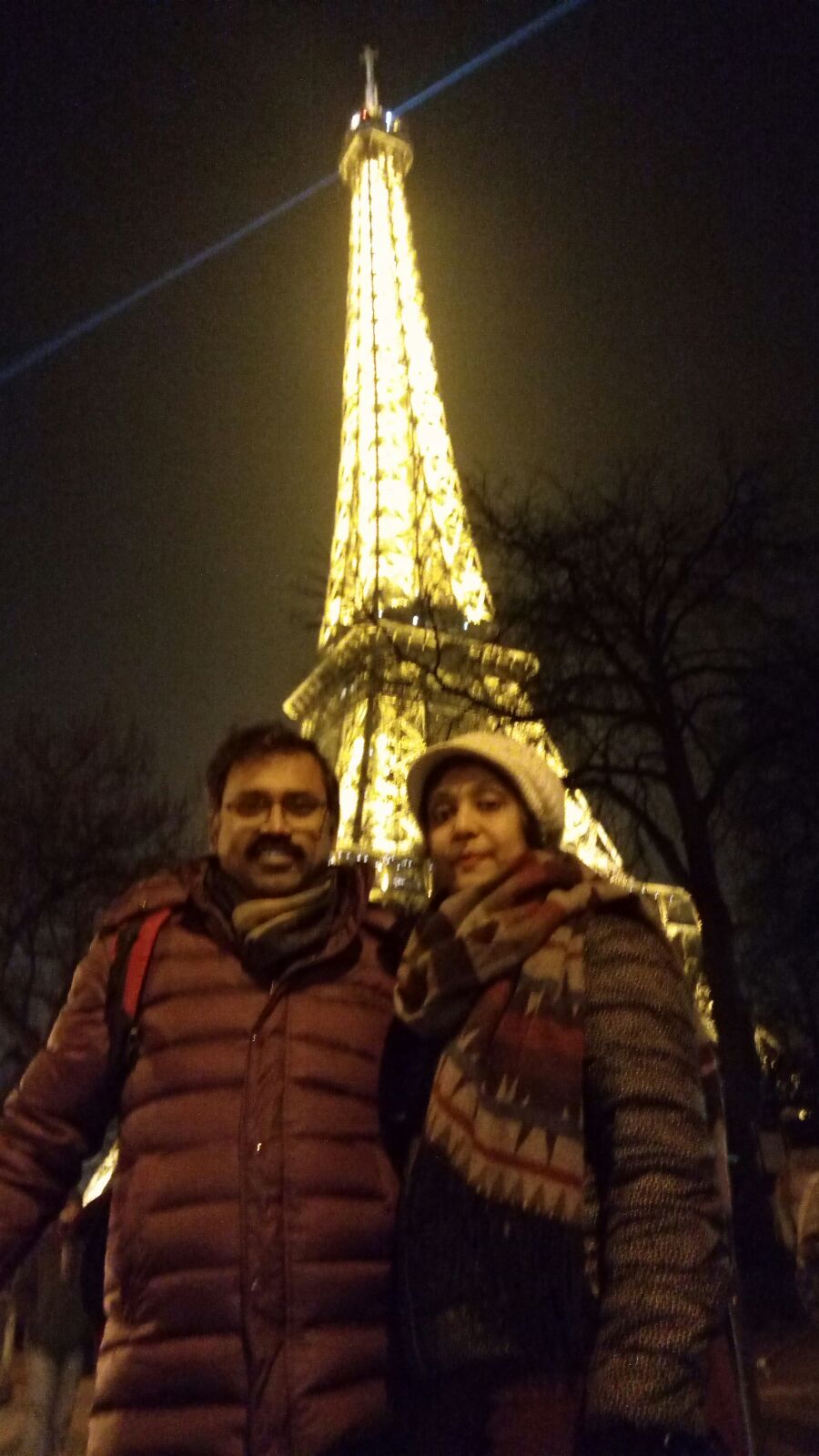 With no heart to leave my Love, I mean the Tower, we started walking back to our place.

So, the second day was even more difficult – to convince the kids to come out of the home. As with any parent, we failed and started spending the time playing cards. But around noon, bingo.

Plan changes again. What’s a plan if it does not change?

We head to the Louvre museum leaving the younger kids back home. Although I have been in here a decade ago, I do not remember anything other than the Mona Lisa I saw here. 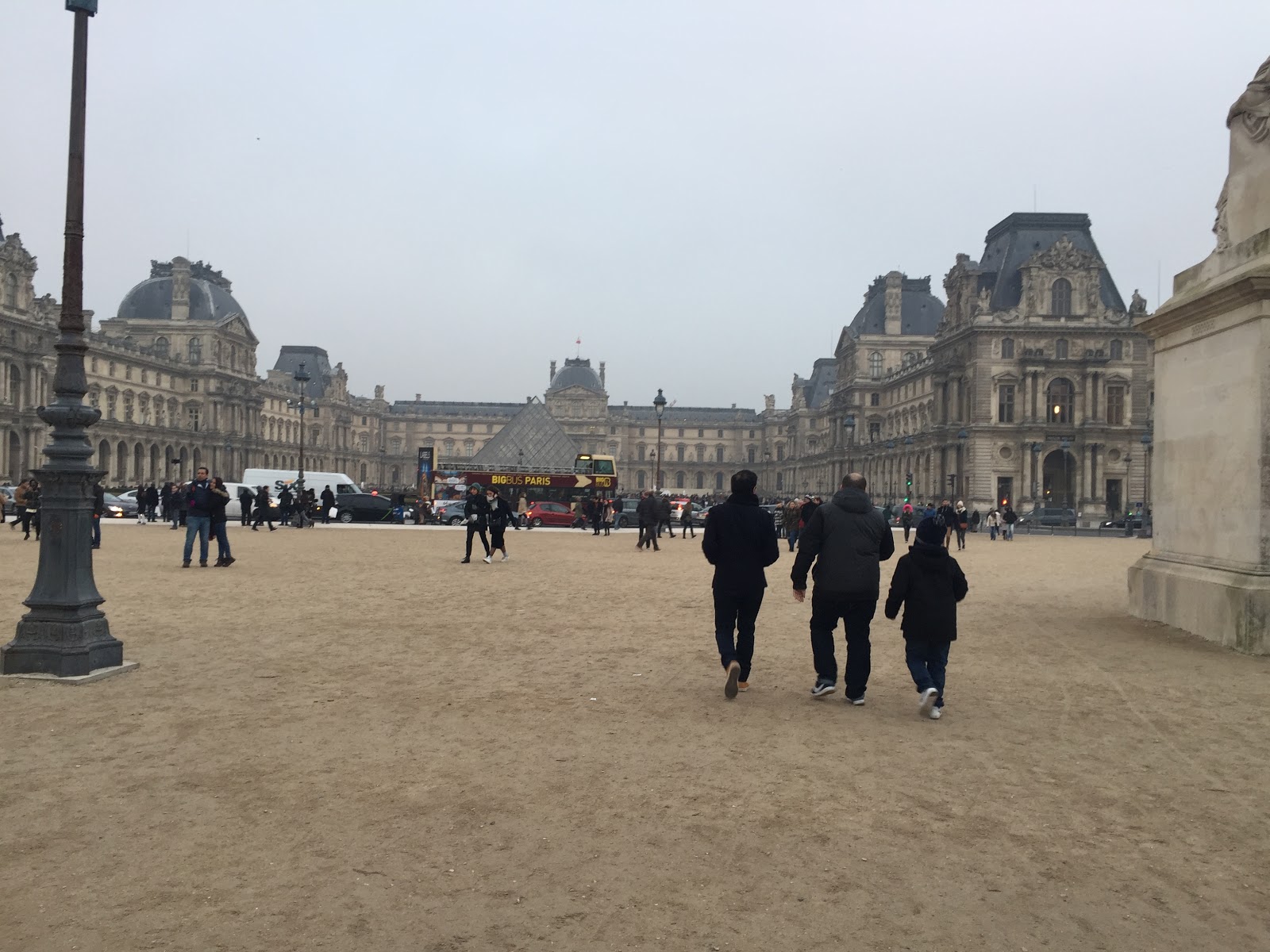 We had a waiting time of little less than an hour for the security. Man, some idiots blew up something and make everyone’s life miserable – be it in the Airport, be it in Monuments or in any famous places.

This museum is one where I would love to have the Audio guide. But, we were so unfortunate that the Audio guide system had some technical issue, and was requested to wait for approx. 2 hours. TWO Hours! No way. We skipped the audio tour and took the regular all-by-ourselves tour.

The Museum is so large, in fact, one of the largest art museums in the world. Frankly, it would take days to complete it fully. We decided to take it as it comes, but not to miss Mona Lisa and my favorite Michelangelo works. After lost in the ocean of beauty and arts, we finally reached the Mona Lisa section. I was so surprised that there were too many crowds around this one art. No not all are admiring the beauty of the art itself, but busy taking selfies. 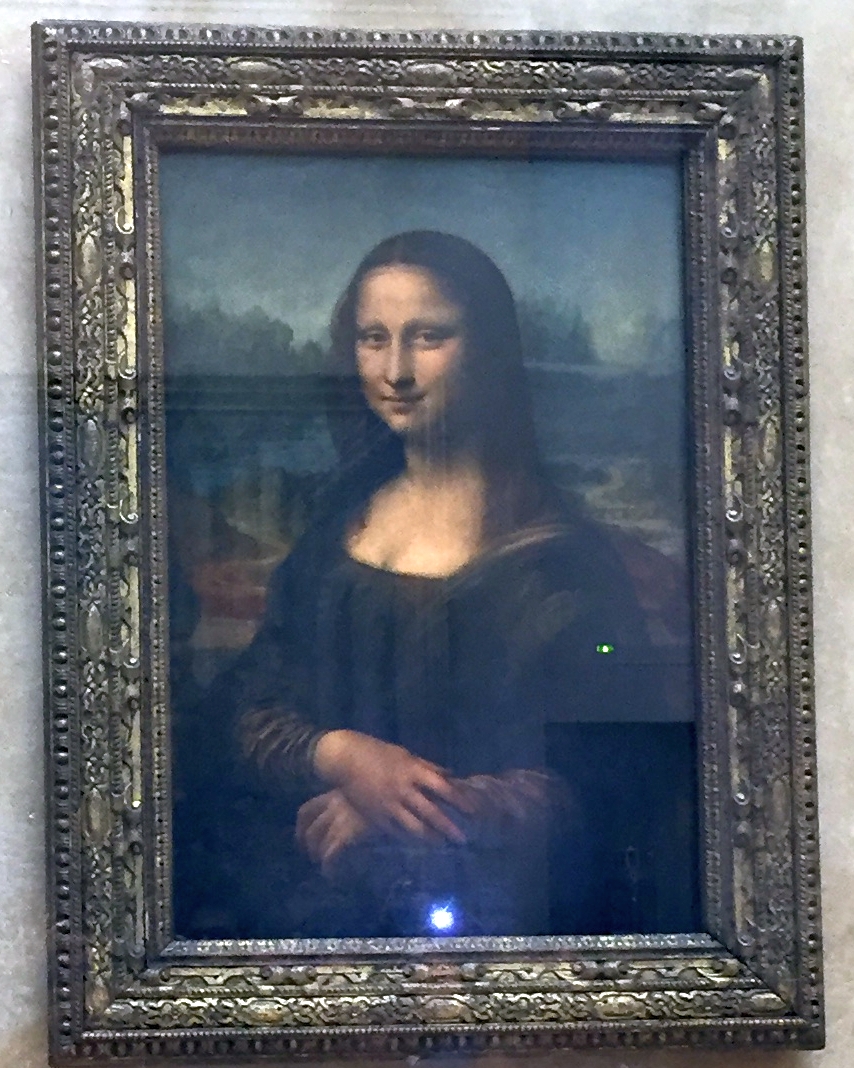 Although technology has given a better life, I would say it has taken much more. People forget that they have been gifted with eyes to admire beauty. Forgetting it, and depending on the camera is what everyone does. No harm in taking a few clicks for memories. But capturing literally 10s and 20s of a picture while a big crowd wait to take a glimpse of the monuments and art is too much. Add to that, people verify the picture and retake tons of times. Wish we had a good old film camera 🙂

Anyway, capturing the beauty in our eyes, and few on our lens for the memories, we moved to the other sections where they had artifacts from Egypt, Roman, and Greek periods.

Yes, reaction after watching the behavior of the people in front of Mona Lisa! 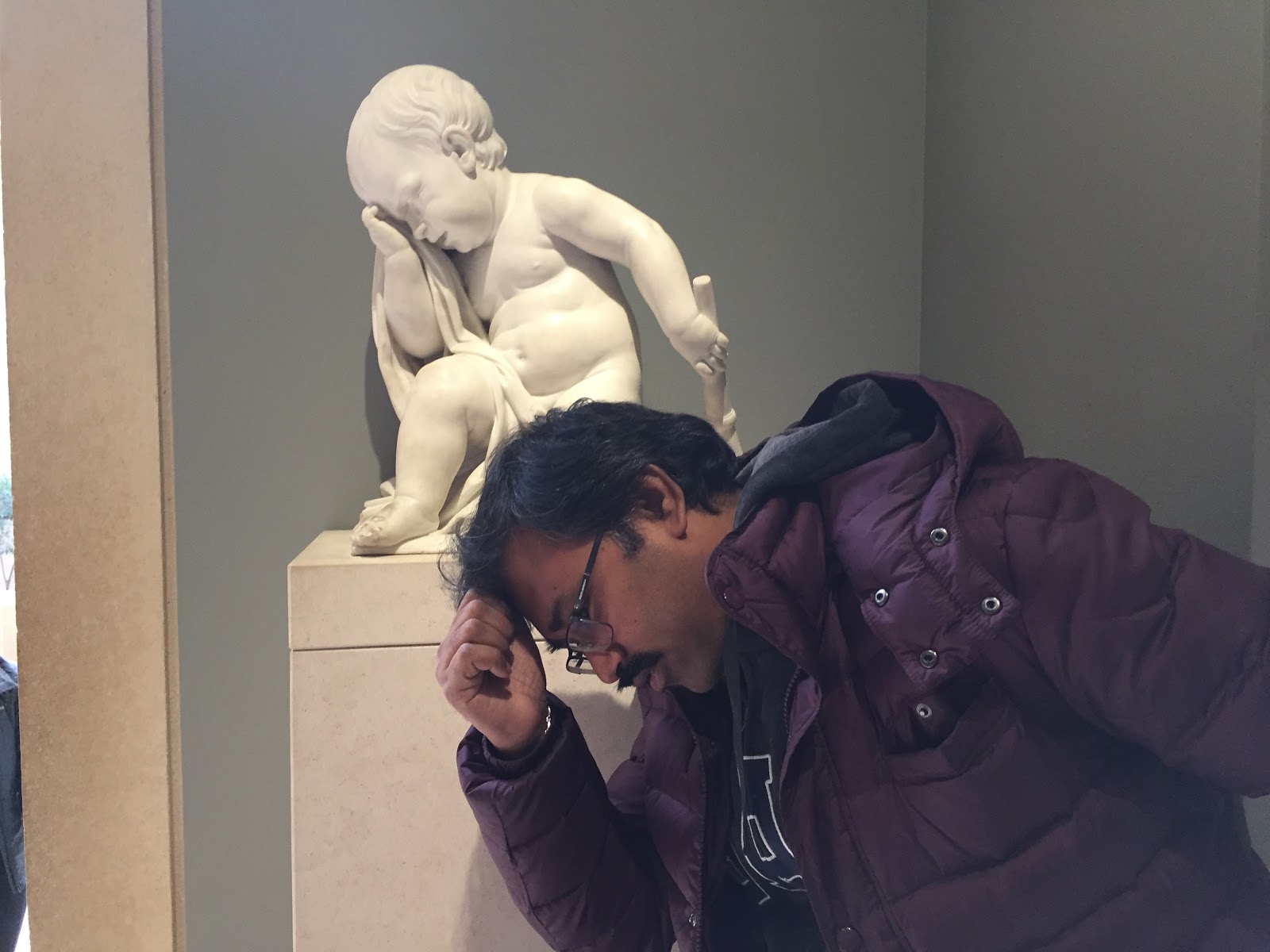 Infact felt like following him and doing the same, but do not want to get behind the bars 🙂 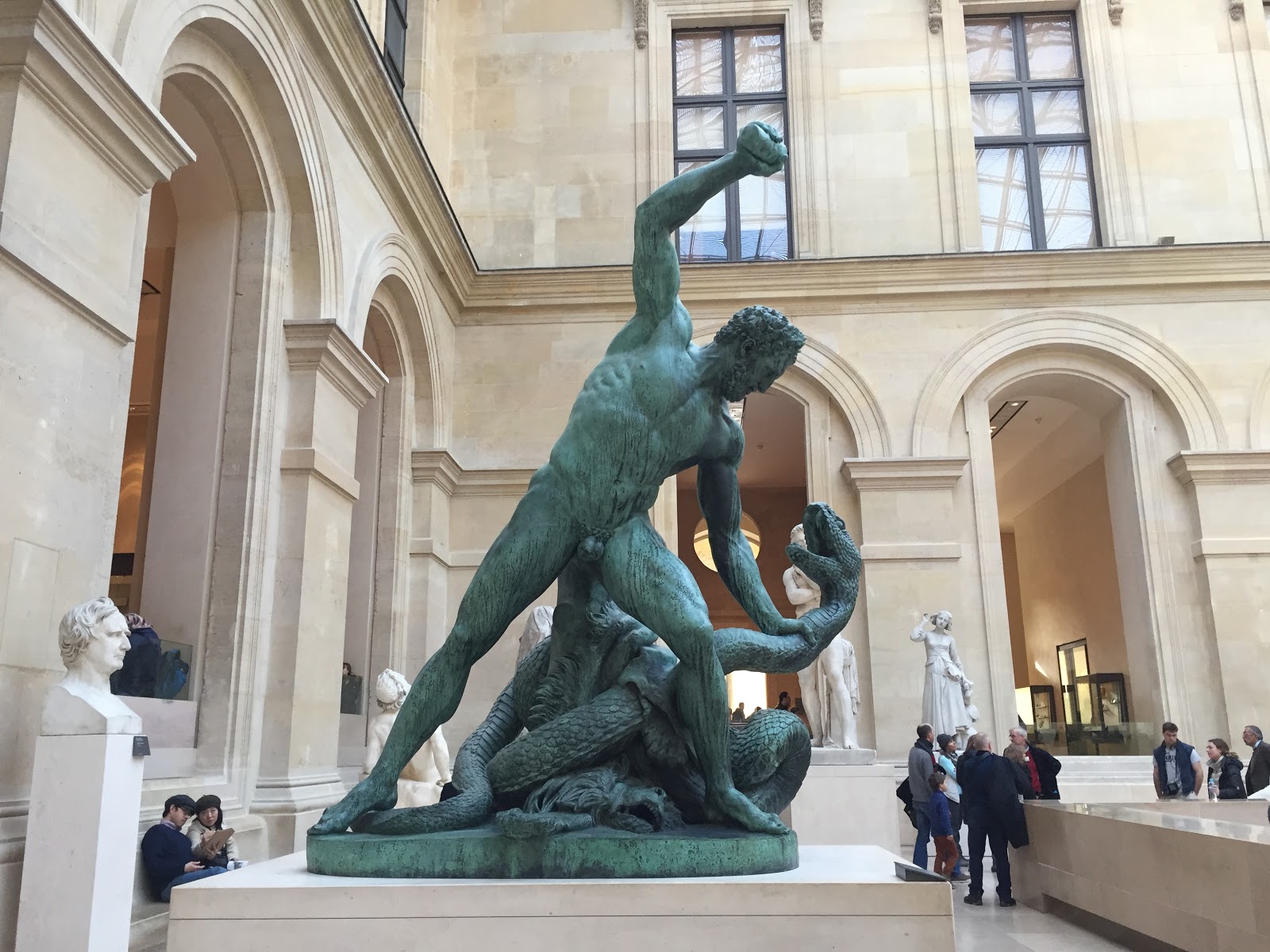 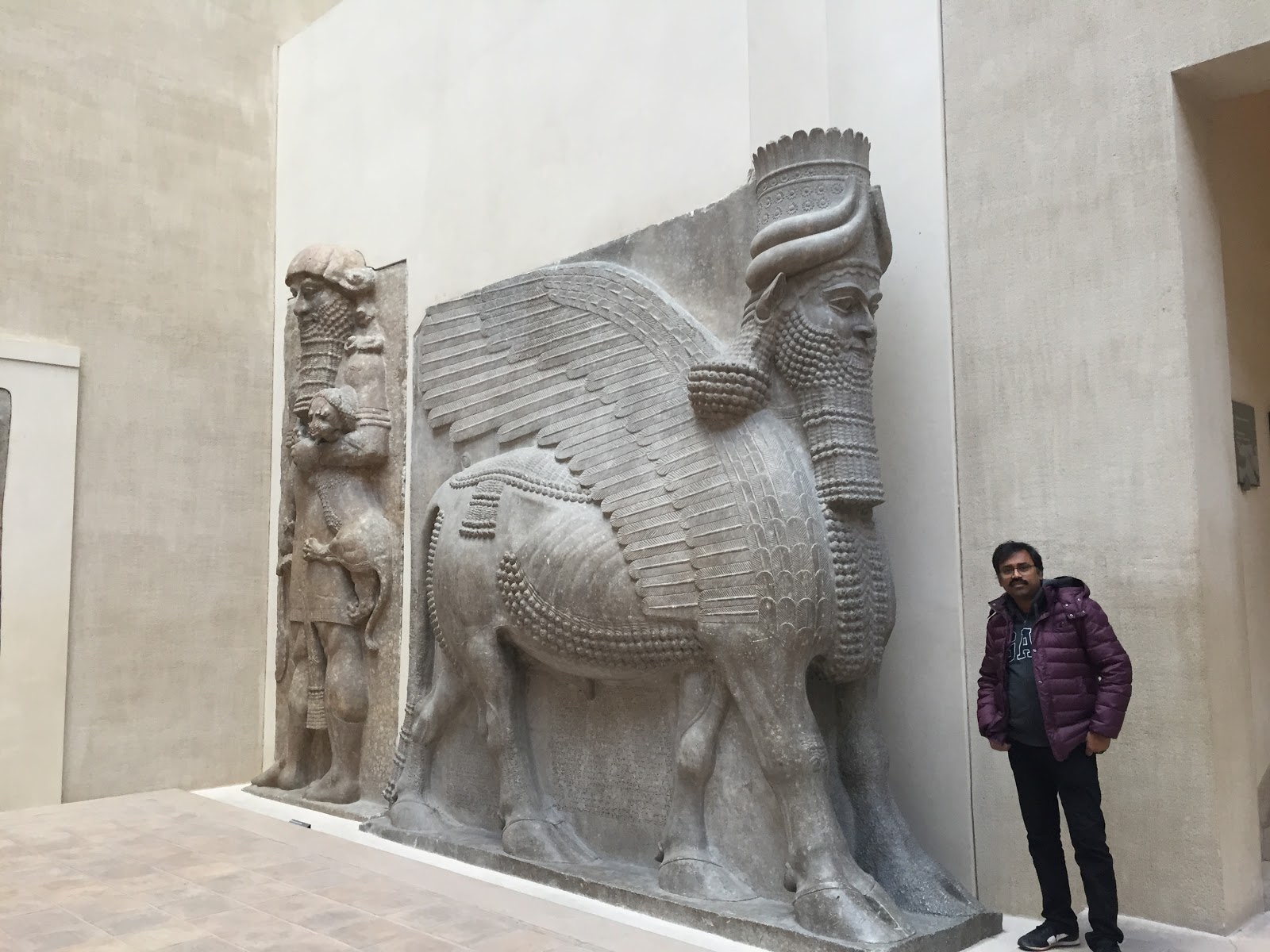 I believe even with that Mask on, it could be easy to predict whose behind, right? 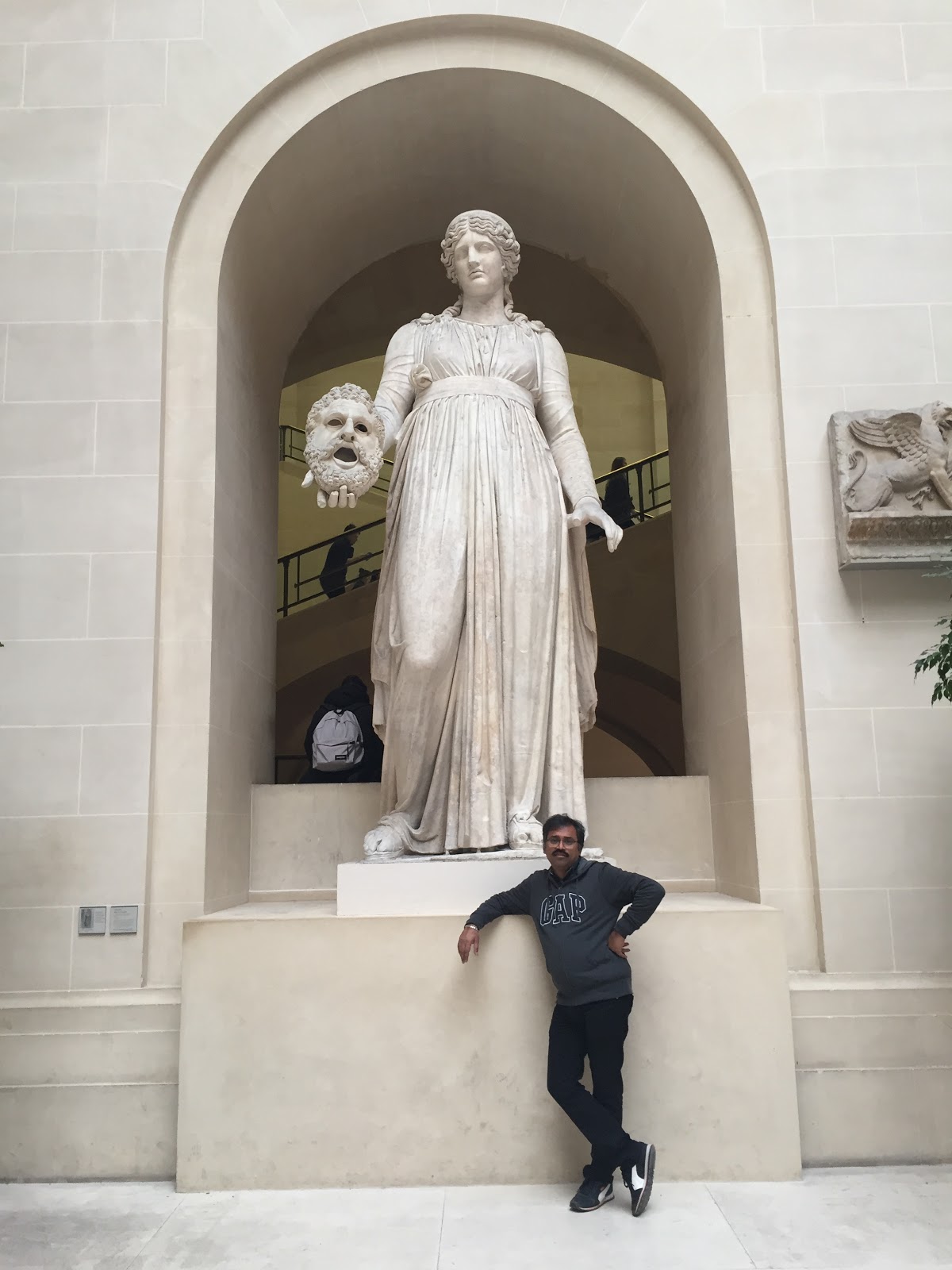 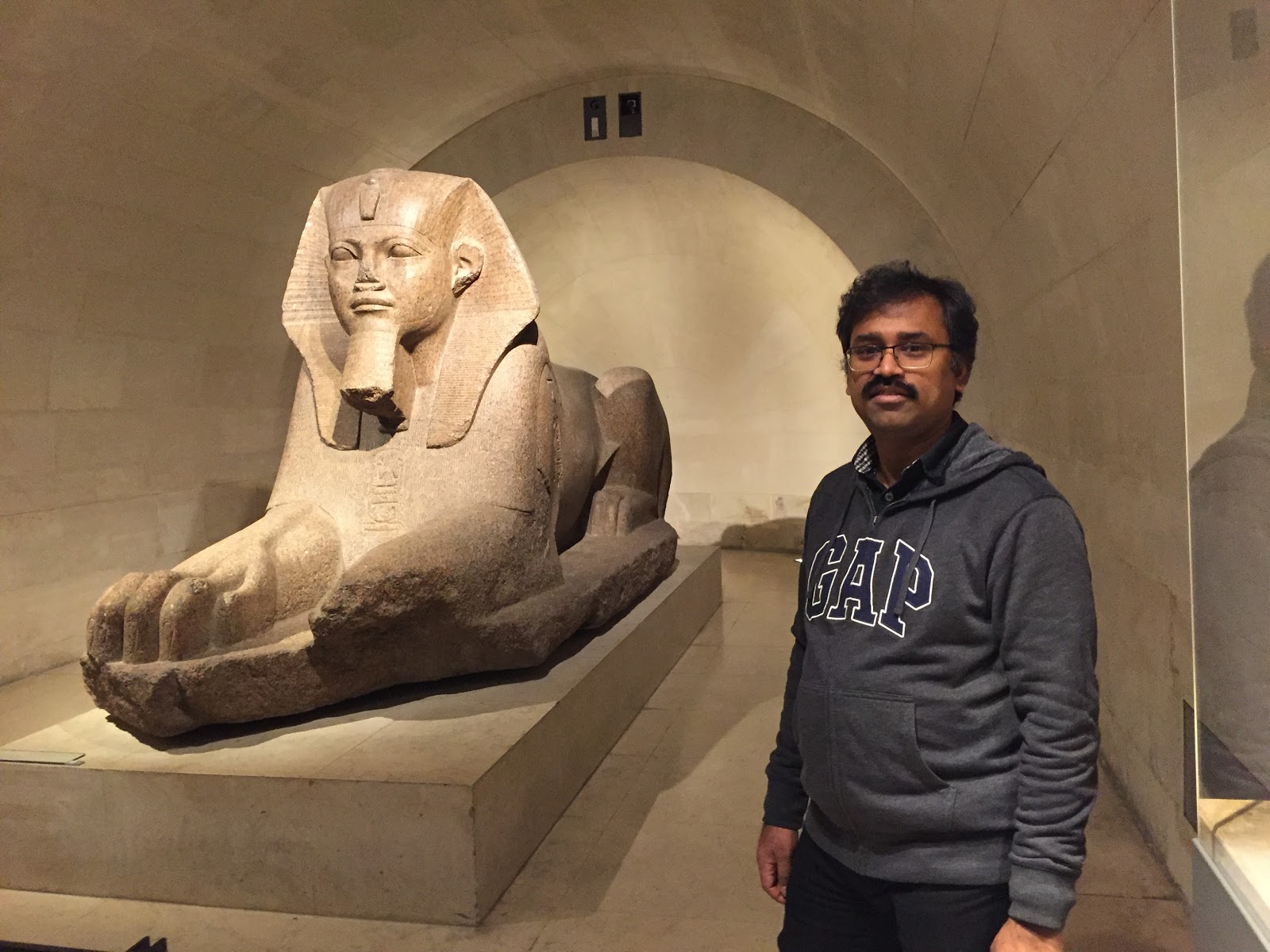 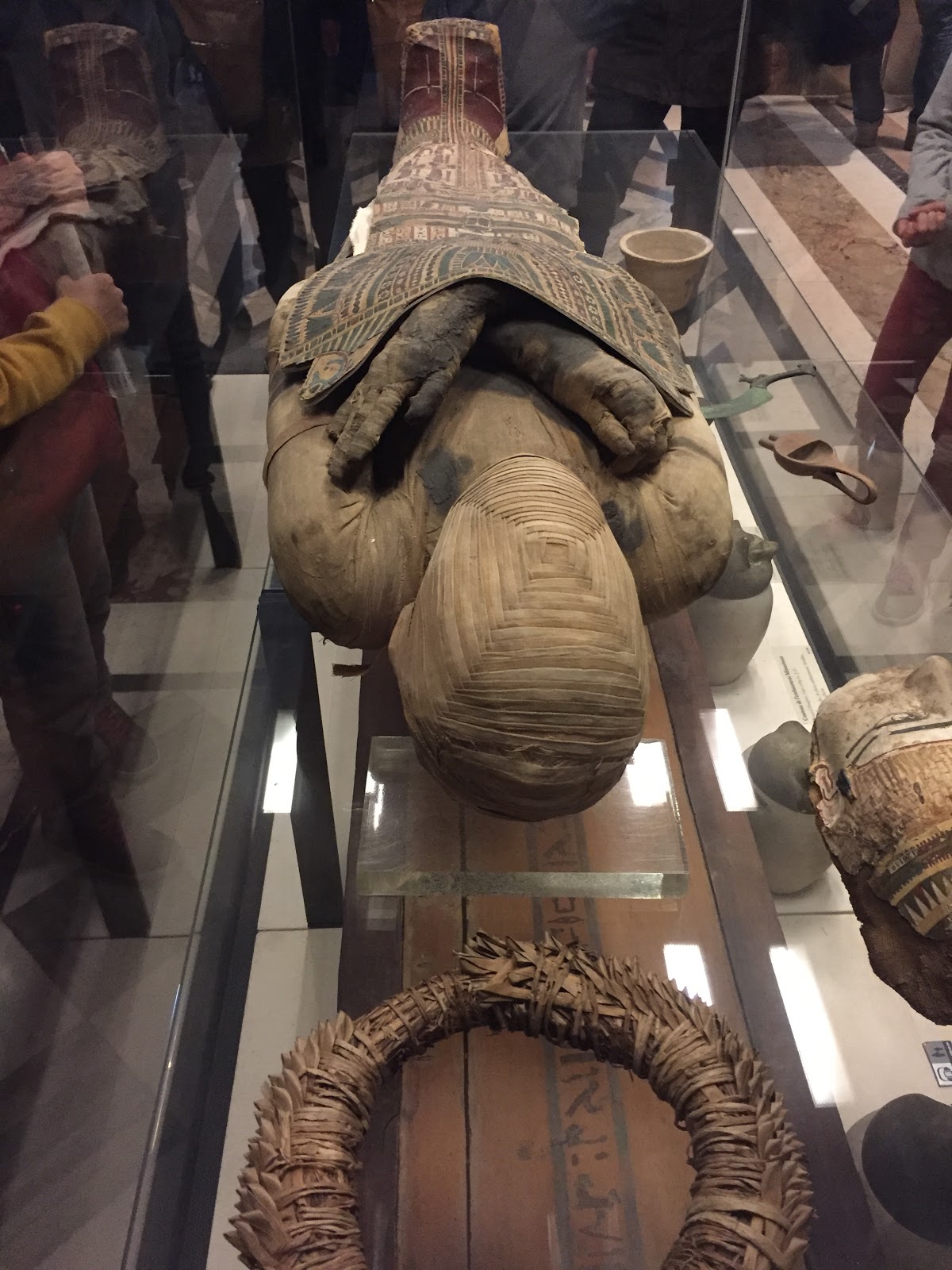 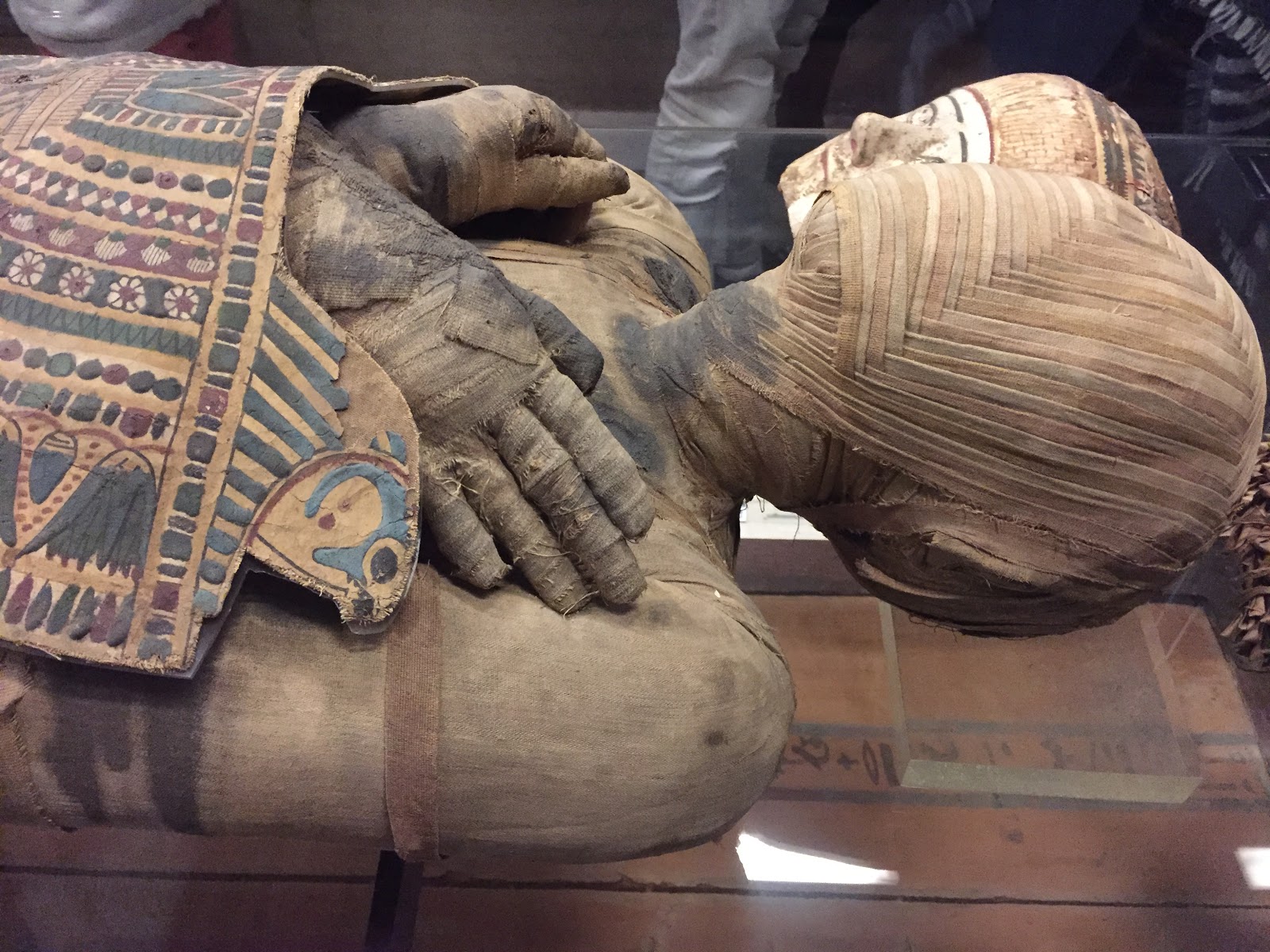 Well, why do I do this? Who knows, everyone does it, so I do. Ok, let’s make it a customary picture. 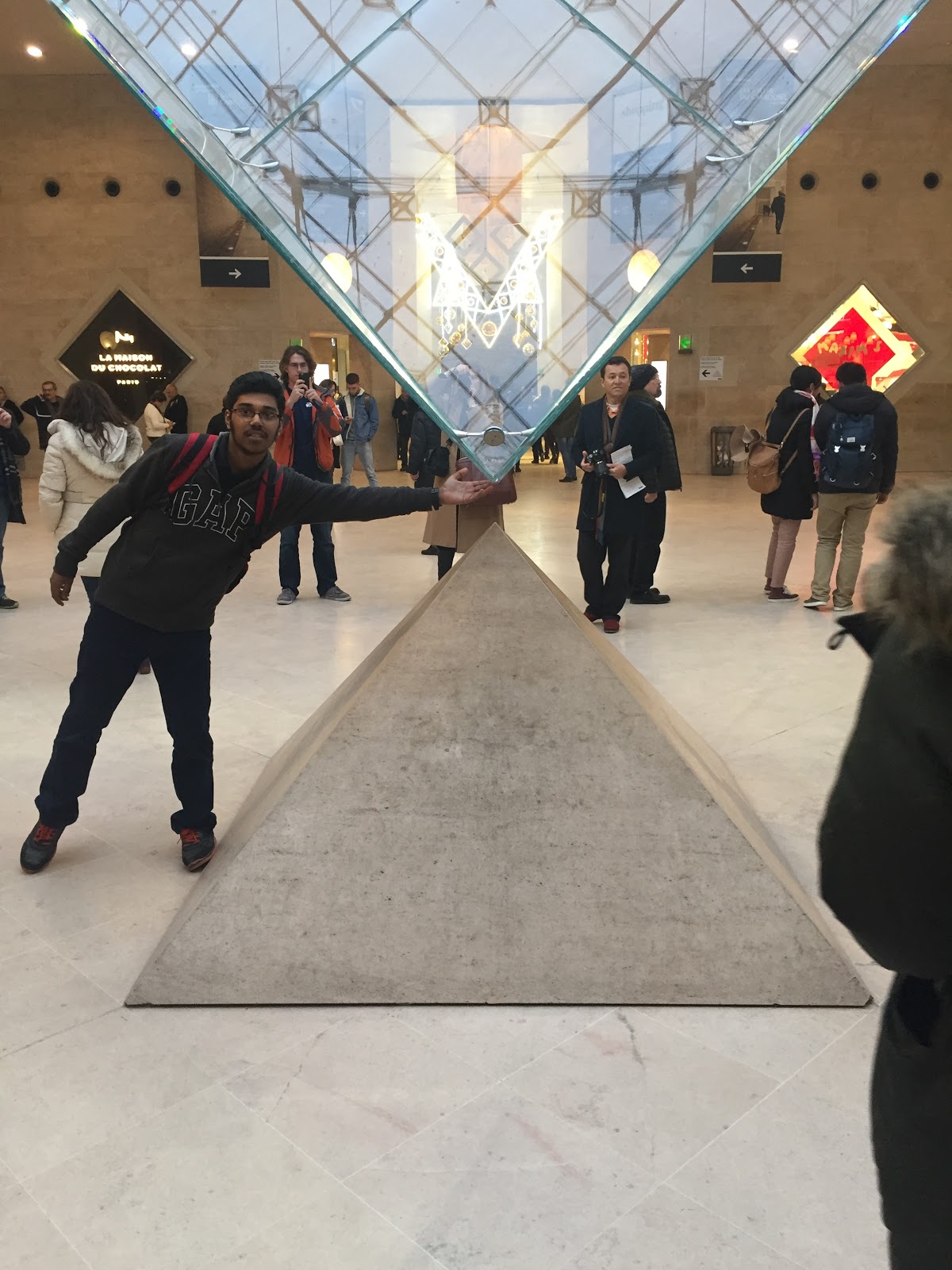 If you can do that, I can stand on the top of the glass Pyramid! 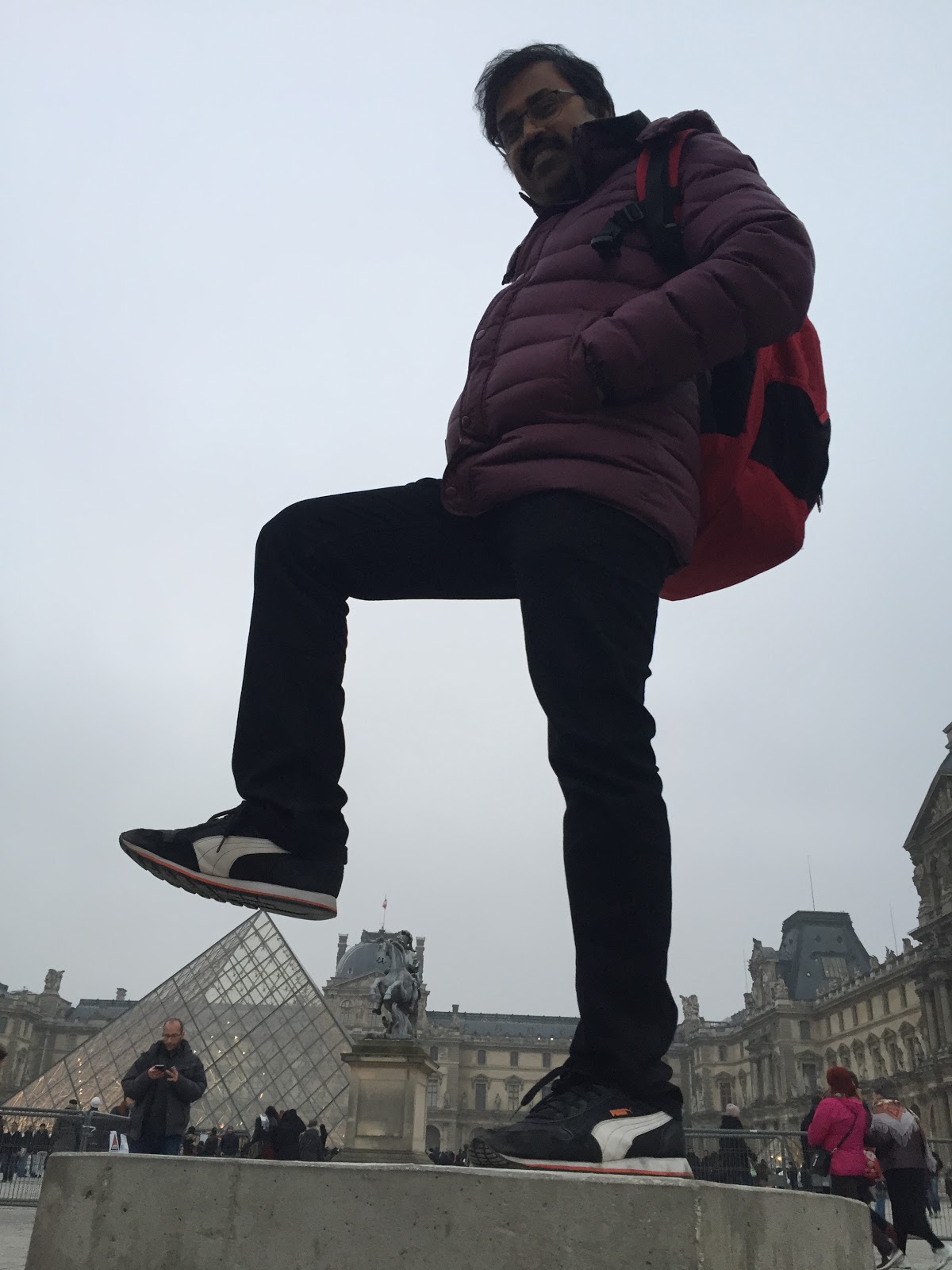 La Defense is one of the largest business parks in Paris. Once in here, you will see plenty of skyscrapers. What’s the point of being Paris if there is no shopping on the agenda? 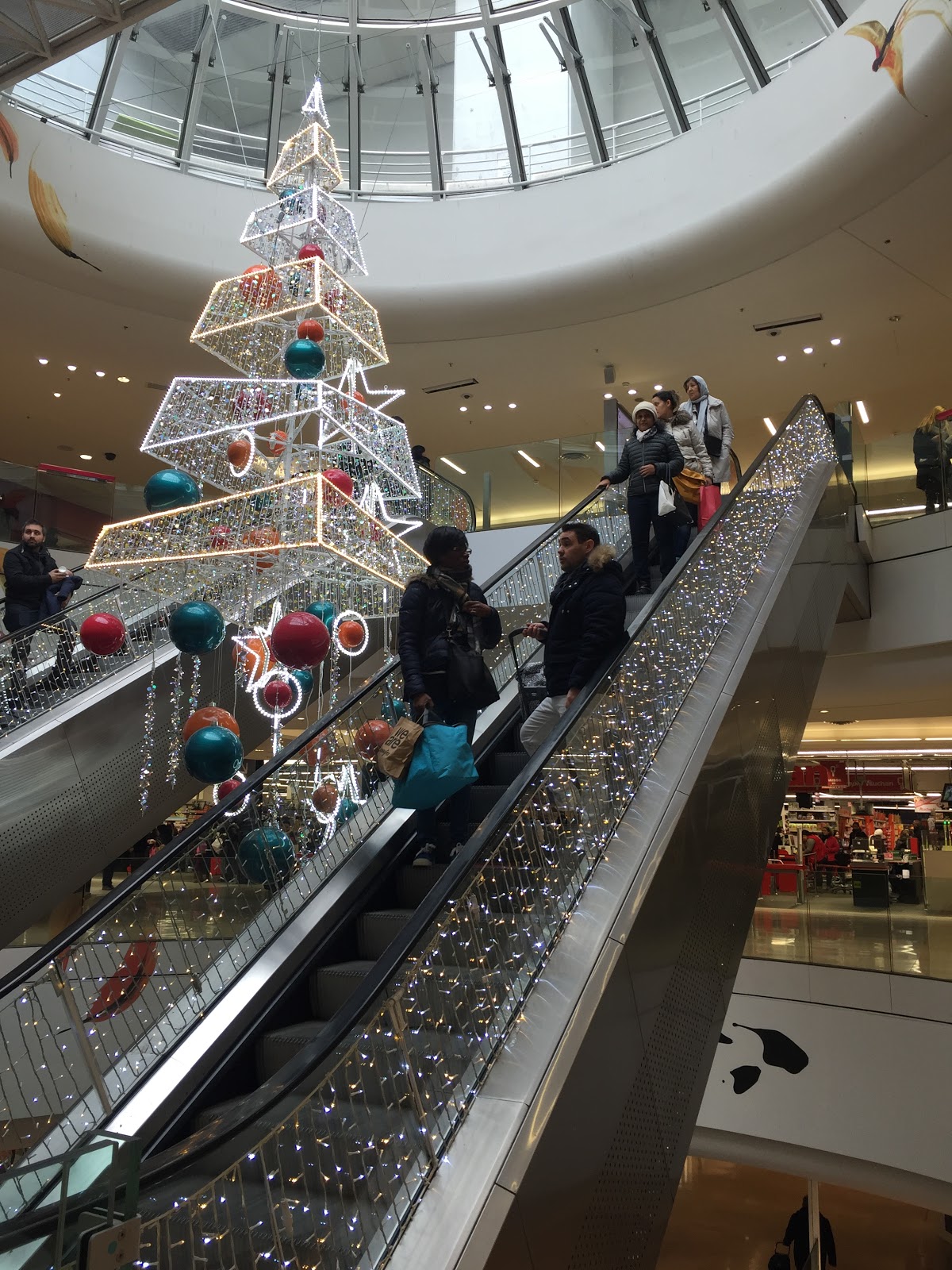 Thanks to the plastics, had a good time shopping until we were forced to move out of the mall – YES, they started closing it by 6 pm due to the New Year’s Eve.

After gifting ourselves a few good things, we headed to the Metro hoping to get someplace in there. Because, the entire mall was being vacated, and 90% crowd was heading to the Metro. We were lucky to grab a place in the metro and reach home safely.

It was just 7 pm, and we were eagerly waiting to welcome the New Year. It was getting really cold out, but everyone back home was voting to celebrate and welcome the New year near the Eiffel Tower.

We left home around 11 pm and started our walk to the tower. We were out there by 11:30 pm shivering in freezing cold. The view of the tower behind those foggy smoke was gorgeous. 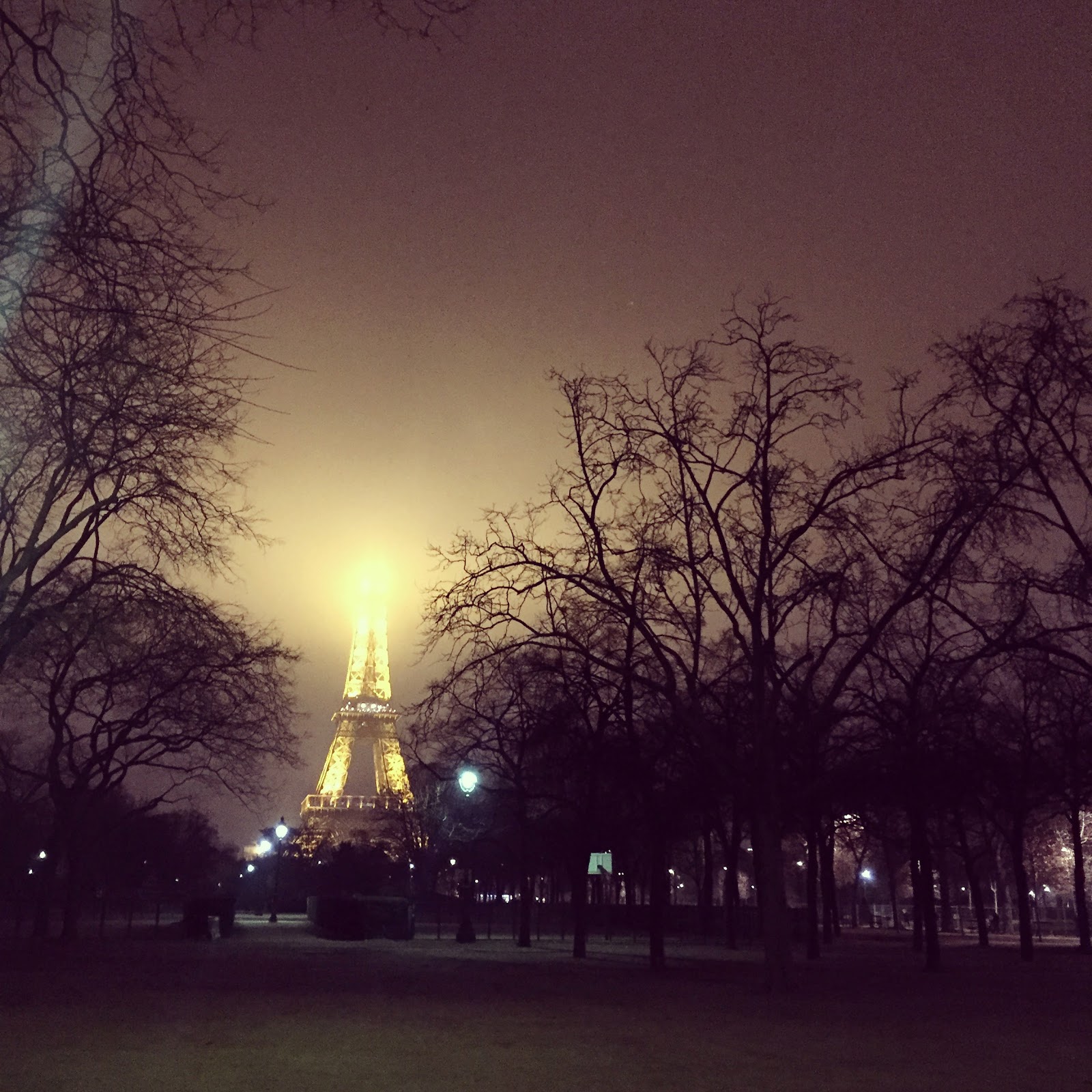 The fog was so dense that we could not see half of the tower. Tick of the 00:00 there was a flashing light from the tower highlighting that we have stepped into 2017. Hurray!!!!

Of course, we were disappointed that there were no fireworks this year too. But the bright colors from the other side, guess around the Champs-Élysées, was convincing us that the whole point of standing here was not in vain. There goes our New Year celebration minus the Champagne.

As a True Desi custom, we are supposed to visit Indian cuisines when in a foreign land. Agreed?

And in Paris, you have every other Indian restaurant in little India? So, the day before our departure was planned to roam in there and have some good south-Indian food.

We started the day with a chill walk in the Champs-Élysées passing those Christmas market. Walking in the middle of this Champs-Élysées street was great – how can’t it be, this street is otherwise even difficult to cross with numerous high-end cars and vehicles passing through it. One end starts with the Giant wheel on Concorde and other end ends with Arc de Triomphe. No, I should not say it ends in here because there is no start or end here. We have like 12 streets joining in here. 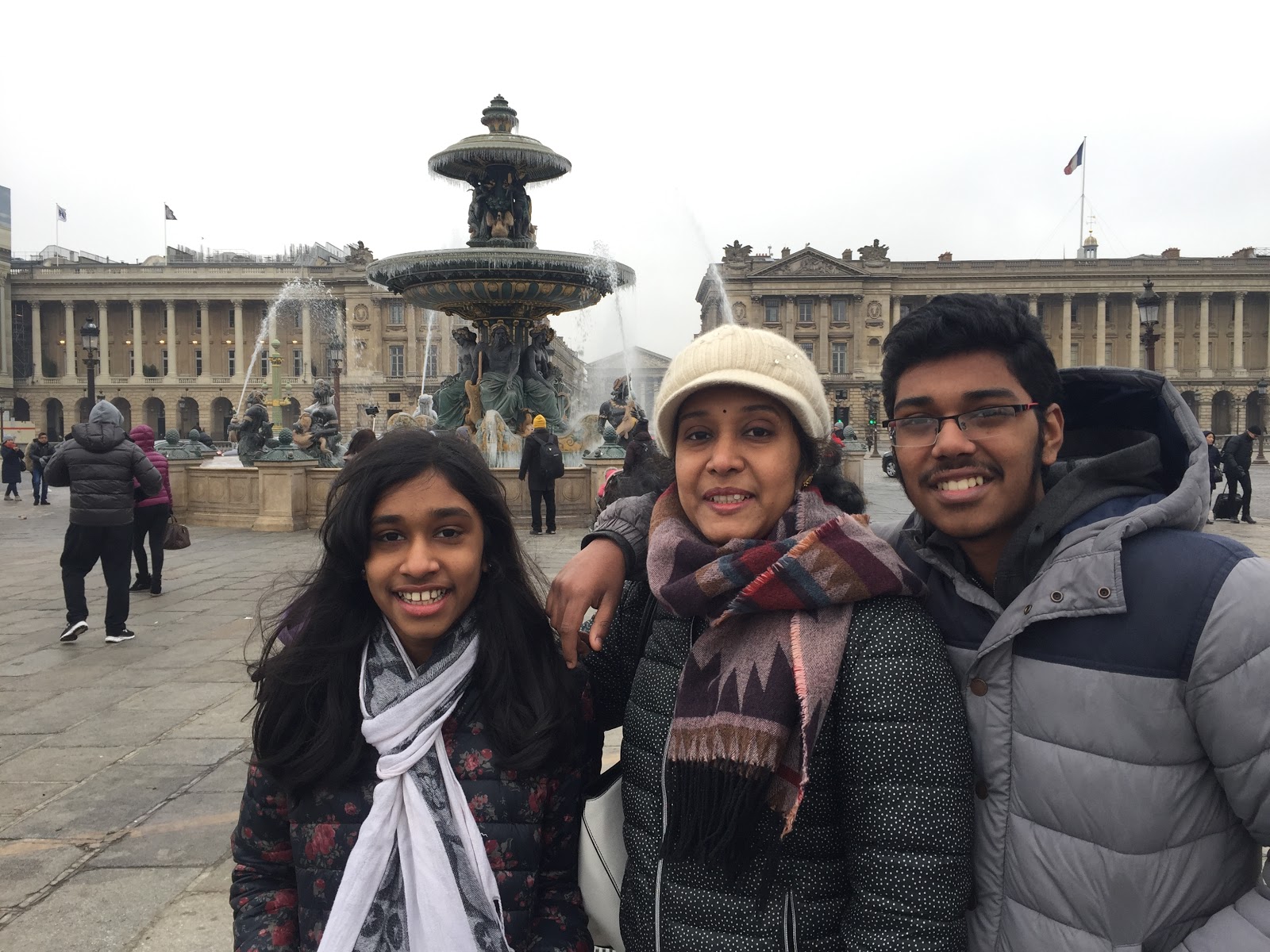 It’s all ours. Its New Year fever. 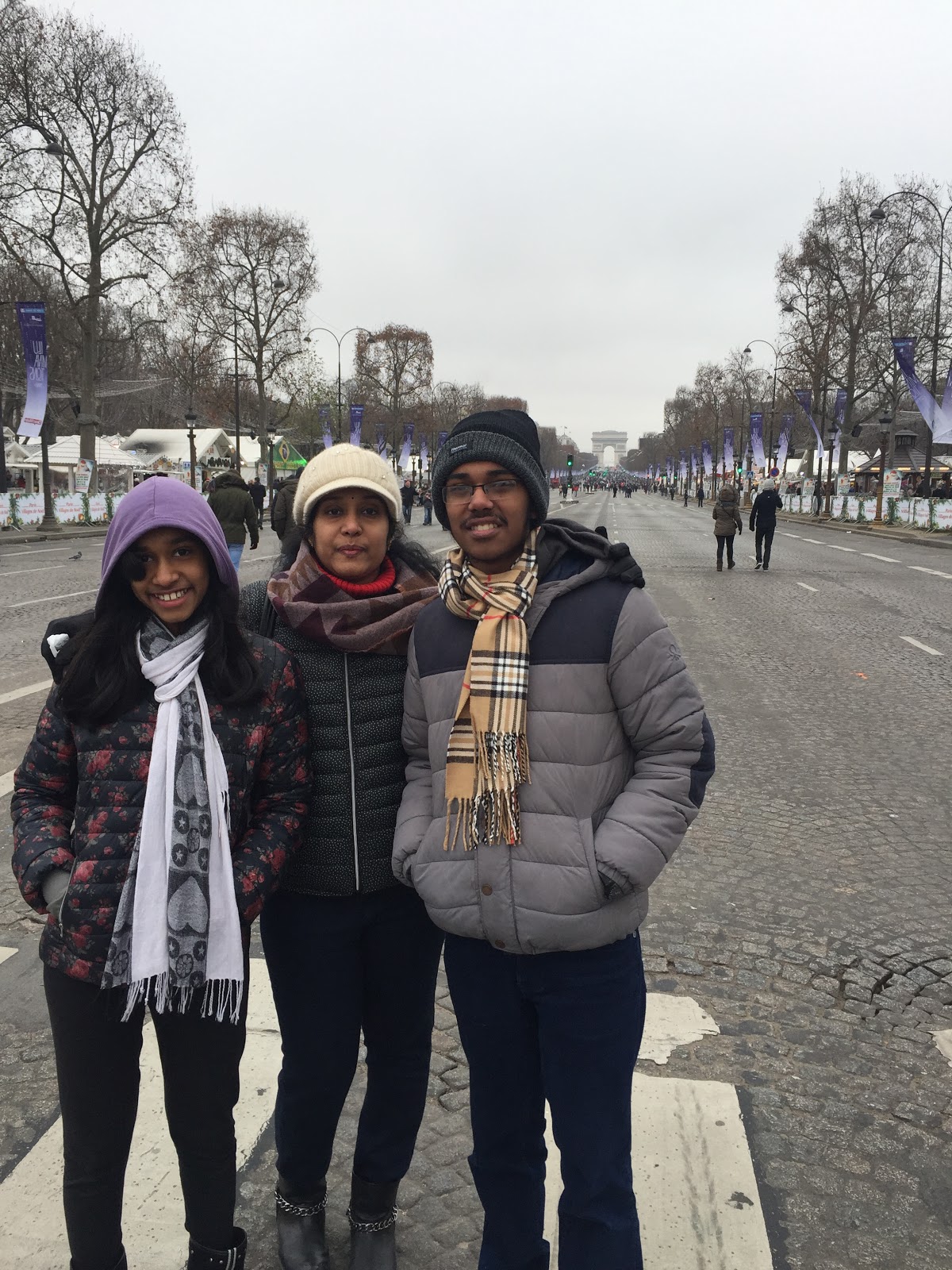 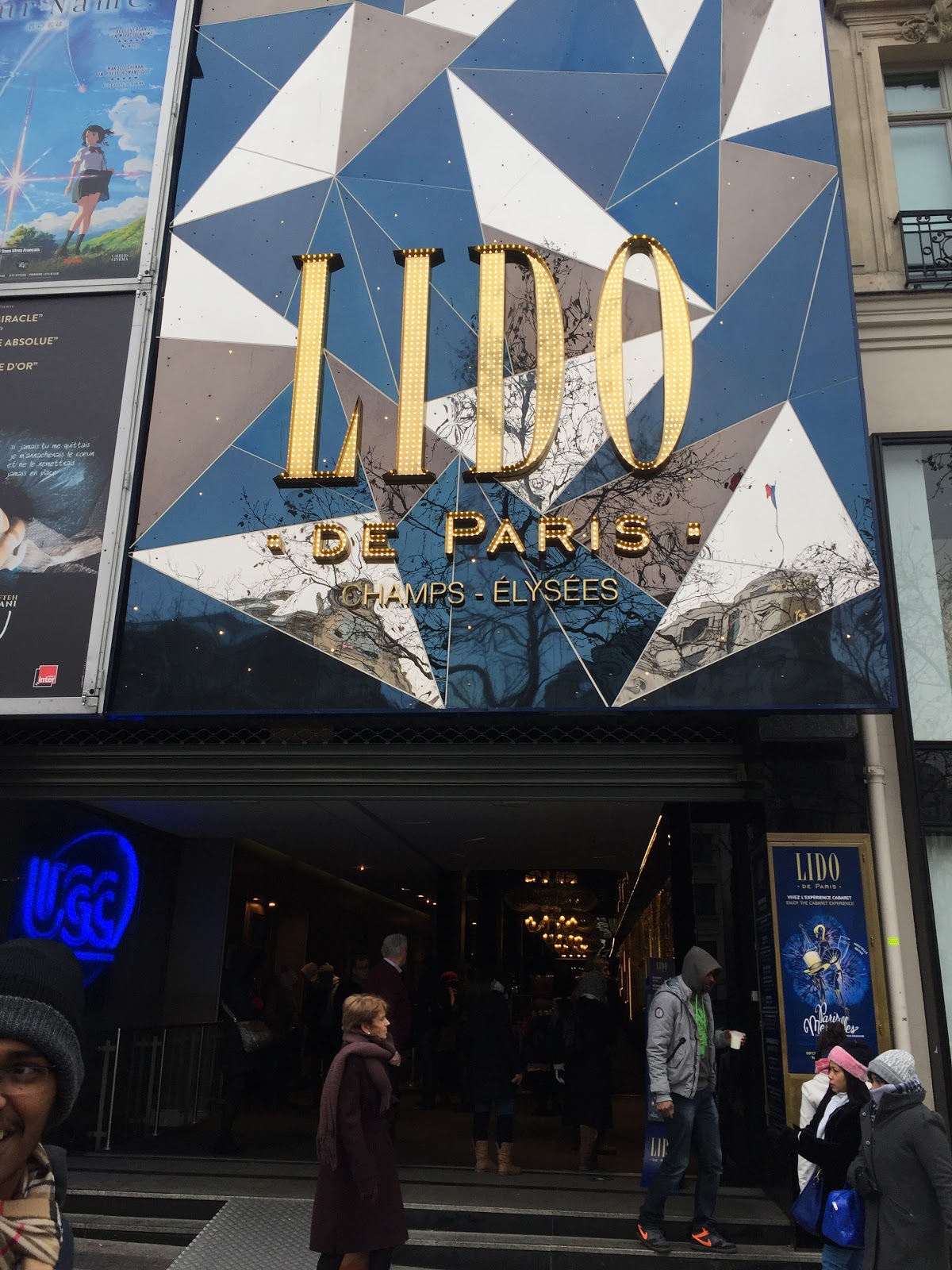 The Arc de Triomphe honours those who fought and died for France in the French revolution. Under this arc, there is a tomb of a soldier who dies in World War I. 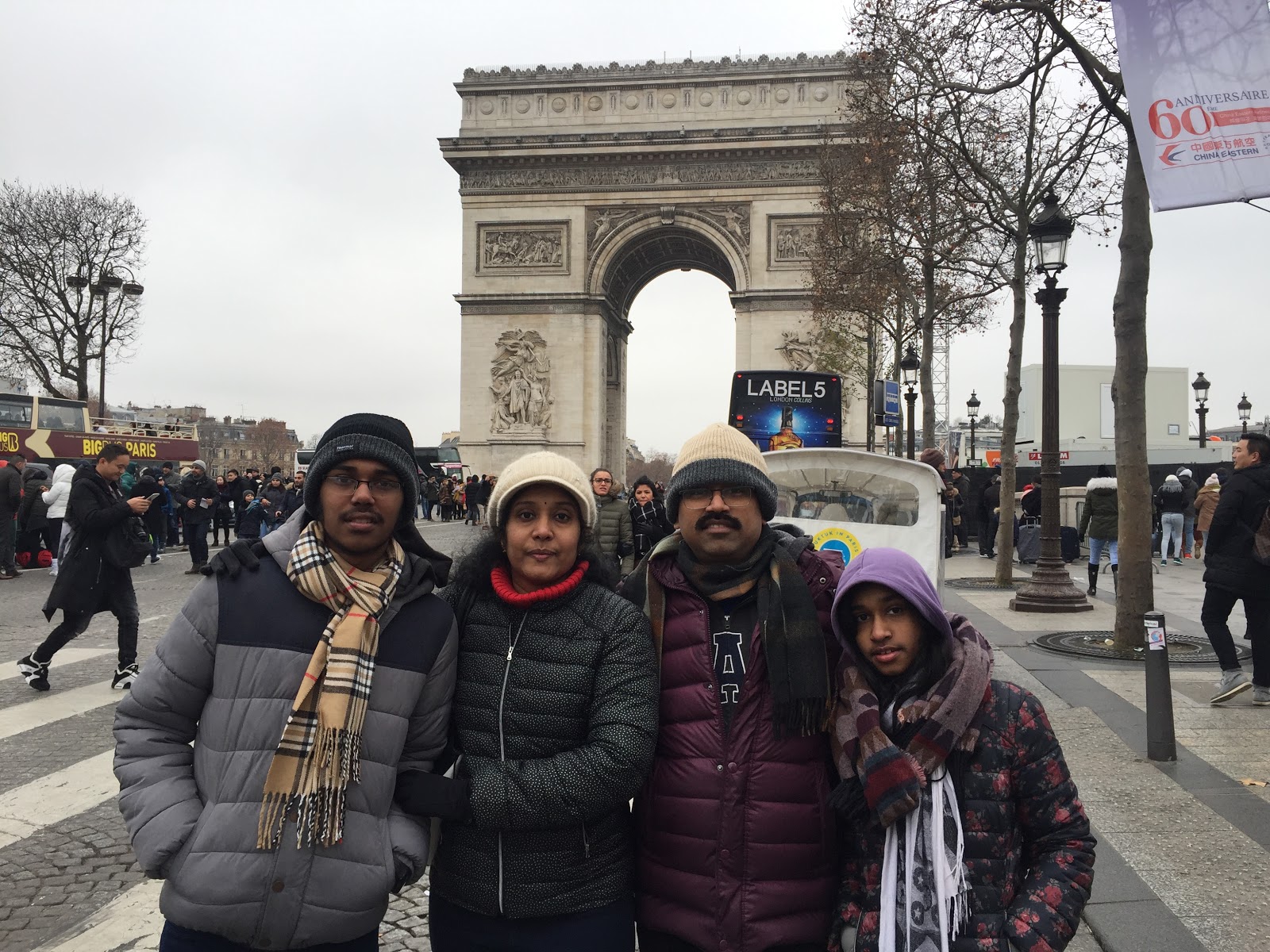 With our legs exhausted it was time to get some fuel for us. We headed straight to our Saravana Bhavan in La Chapelle. I should say, we did not miss anything – not even the local music from Vanakkam Chennai!!!!

After a few shopping, we headed back home, to pack so we can leave on time the next day.

And the final day has arrived. Every excitement has an end, for a good reason. With a heavy heart, we left Paris to head back to Milan and start our regular life.

Even though our flight was delayed by almost 2 hours, we did not feel any discomfort. We were blessed to keep watching those snow falling in the airport.

So, here we are at the end of the excellent trip after welcoming the New Year in Paris.

Maheshwaran Jothi Maheshwaran Jothi is an author and travel blogger. He loves getting lost in the lap of mother nature and loves the journey more than the destination.
Pisa – The tower that is so respectful Salamat Datang – Malaysia, Truly Asia

Things To Know About Coronavirus In Italy

The Ultimate Guide to Traveling By Train in Italy